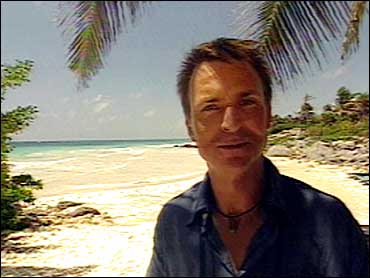 Married couple Joe and Heidi reached the end of their journey on "The Amazing Race" Sunday night when they failed to decipher a Morse Code message and never even made it to the finish line.

Host Phil Keoghan sought them out the in trenches in the dark to deliver the bad news: everyone else had crossed the finish line.

Police detectives Michael and Louie came in first, for the second episode in a row, and won matching large-screen HD TVs. They were also responsible for Joe and Heidi's defeat.

The married couple had been racing in the middle of the pack when the detectives tagged them for a U-turn, meaning they had to go back and do the second task in the detour.

Teams were given the choice of in the trenches or under fire. The trench task involved decoding a message in Morse Code and the fire task involved crawling on one's belly across a muddy field as World War I bombers strafed the landscape.

Both involved donning War War I soldier's attire. All teams chose the under fire task, a wise move, it appears, from Joe and Heidi's fate.

"Smart people do code; dumb people do this, one of the lesbian teammates said as she wriggled through the mud amid explosions nearby.

The other tasks involve finding as bakery and buying a baguette, which had the next clue in it, and donning turn-of-the-century cycling outfits for a four-mile ride on antique bikes.

Jordan and Jeff, last in last week's non-elimination episode, managed to complete the speed bump - an extra chore that only they had to perform - and still come in ahead of Joe and Heidi.