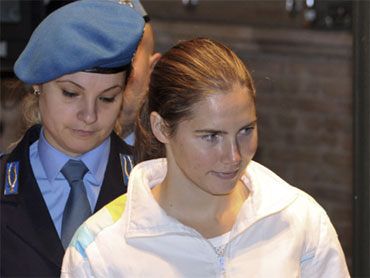 The parents of American student Amanda Knox are being investigated for alleged defamation for saying Italian police abused their daughter before arresting her in the 2007 slaying of her British roommate.

Curt Knox told AP Television News on Saturday that he and his ex-wife, Edda Mellas, received notice of the investigation on Friday as they arrived in Italy for the final week of hearings in their daughter's case.

He said he found the timing odd given that a verdict in the case is expected at the end of the week.

Italian news agency ANSA said Knox's parents were being investigated for alleged defamation stemming from an interview they gave Britain's Sunday Times in June 2008 in which the father alleged police had physically and verbally abused his daughter during questioning before she was arrested.

"We received some papers yesterday, it is true, we haven't see the file yet," Curt Knox said, declining to comment on the specific charges.

Both Curt Knox and Mellas said they thought the timing of the investigation was unusual.

"Well, it is odd that the timing is coming out now, five days before the end of the trial, and this is supposed to be something that happened over a year ago," Mellas said.

Both Knox, 22, and her ex-boyfriend Raffaele Sollecito, 25, are accused in the fatal stabbing of Kercher during a drug-fuelled sex game - charges Knox dismissed as "pure fantasy."

Defense lawyers for Sollecito wrapped up their arguments on Saturday, spending six hours dismissing the prosecutor's reconstruction of Kercher's murder, arguing that Sollecito was not associated with the murder.

Sollecito's defense also aimed to prove Knox's innocence. Attorney Luca Maori said only one person was responsible for Kercher's death - Ivorian Rudy Guede, who has already been convicted to 30 years of imprisonment after a fast track trial. (Guede is appealing his conviction.)

Monday will be a crucial day for Sollecito's defense lawyers who will start closing statements, focusing on disproving the DNA evidence found by prosecutors.

Arriving at the courthouse on Saturday, Knox's father said his family was looking forward to hearing from Sollecito's defense lawyers.

"It's going to show a different side of the story and we look forward to seeing that today," Curt Knox said.

On Friday, a lawyer representing Kercher's family sought a total of €25 million ($37 million) in damages from Knox, Sollecito and Guede. All deny any wrongdoing.

A verdict is expected next week.

Kercher's body was found in a pool of blood on 2 November 2007, in the apartment she shared with Knox in the central Italian town of Perugia.

Prosecutors argued that Knox resented her British roommate and killed her, together with Sollecito and Guede, under "the fumes of drugs and possibly alcohol."

They said Knox hit Kercher's head against a wall, then tried to strangle her, as Sollecito held her and Guede sexually assaulted her.

Knox and Sollecito have been jailed for more than two years since being arrested shortly after the murder.

According to prosecutors, a knife with a six-and-a-half-inch blade, with Kercher's DNA on the blade and Knox's on the handle, was found at Sollecito's house.

Defense lawyers argue that the knife is too big to match Kercher's wounds and that the amount of what prosecutors say is Kercher's DNA is too low to be attributed with certainty.

Prosecutors also maintain Sollecito's DNA was found on the clasp of Kercher's bra, although his defense team contends that the evidence might have been inadvertently contaminated during the investigation.

Prosecutors also asked the court to convict the defendants on lesser charges, including staging a break-in and the theft of $444 in cash and Kercher's cell phones.

Prosecution said Knox and Sollecito staged a burglary in the apartment by breaking a window in a bedroom in an attempt to sidetrack the investigation.

Knox also is being tried on charges of defamation for allegedly accusing Diya "Patrick" Lumumba, a Congolese man who owns a pub in Perugia where she worked, of being the killer.

Because of her accusation, Lumumba was briefly jailed. He was later cleared and is seeking damages from Knox.

A verdict in both the civil and the criminal cases is expected at the same time.