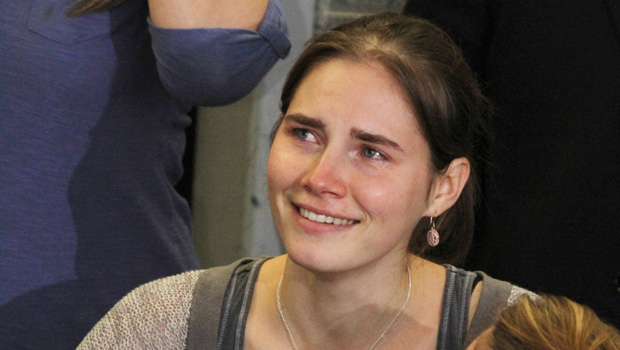 (CBS) - An obscure child custody case in Perugia, Italy has revealed what prosecutors allege was a rogue group of four detectives in the town's elite homicide squad. Three of the detectives currently under investigation worked on the Meredith Kercher homicide in 2007 - and may shed light on how the murder squad bungled the interrogation of Amanda Knox in November 2007.

On Nov. 17, 2012 in Perugia, a young woman discovered that the four tires on her mother's car were slashed and a note, written in blue crayon on the hood, read, "Bitch, so you'll learn not to take children away from their mothers." A phallic symbol was also drawn on the car hood.

The next day, a Perugia lawyer came home to find "You must die" and "Pedophile" spray-painted on his house. The lawyer called police to report that he saw a dark Audi speeding away from his home.

The lawyer is Vittorio Recolcati. The woman who had her car tires slashed is Francesca Ciammarughi, a psychologist. Perugia prosecutors say Recolcati and Ciammarughi have one, key, person in common: Monica Napoleoni.

Monica Napoleoni is a deputy commissioner in the Perugia police department and was, until recently, chief of the murder squad. Italian newspapers have referred to her as "super-cop." She stands out in a crowd. Reporter Nina Burleigh described her in Time magazine as having "Morticia Adams hair, deep tan, deep décolletage, hot-pink baby doll tops." But style is not what brought Napoleoni media attention and fame. She and her murder squad were the lead investigators in the Meredith Kercher homicide case.

Monica Napoleoni and lawyer Vittorio Recolcati were married and are now divorced. They share custody of a son. Last year, Napoleoni asked a Perugia court to revoke her former husband's parental rights. The court appointed psychologist Francesca Ciammarughi to evaluate the divorced parents and what was best for the boy. The psychologist submitted a report that said the father, Recolcati, should retain his rights.

After Ciammarughi's report led the court to reject Napoleoni's petition, a few detectives in the Perugia murder squad began investigating the psychologist. Prosecutors say "hundreds of questions" were put into the internal police computer concerning the psychologist. The questions were about the properties she owned, the accounts she maintained, the type of car she drove, and the number on her license plates. The inquiries were made on November 14 and 16, 2012 - just days before the disturbing incidents directed first at the psychologist and then the former spouse.

Prosecutors say murder squad detective Lorena Zugarini oversaw the illegal computer inquiries. Zugarini also worked on the Kercher case and was one of Amanda Knox's interrogators. Nina Burleigh described Zugarini as being "built like an East German swimmer." For Knox aficionados, Zugarini is best remembered for a 2007 video showing her kicking in a glass door at the Kercher crime scene.

In February 2013, a judge suspended Zugarini from the police department for two months because of her misuse of the police computer system. She, Napoleoni and two other murder squad detectives remain under investigation for abuse of power, though a judge has said it is not inconceivable that Zugarini could have "operated on her own initiative" - in other words, went rogue.

Have there been other times when murder squad detectives operated on their "own initiative" and violated a person's right? Say, for example, in the Meredith Kercher murder case?

In that case, which detective decided not to have an audio tape recording of Amanda Knox's interrogation, even though it was otherwise standard procedure? Which detective determined Amanda Knox was not a homicide "suspect" until police got an incriminating statement from her? Zugarini has said she offered Knox a "French pastry," but did not mention a lawyer, even though it was Knox's right to have one.

In February 2013, Zugarini, Napoleoni, and two other detectives were transferred out of the murder squad as a result of the Perugia prosecutor's investigation into abuse of power allegations. The Perugia prosecutor also entered wiretap evidence into court which revealed one murder squad detective telling Napoleoini that the detective was concerned about potential questions from the prosecutor about "what we did for you."

The judge in the case has ruled there is no evidence against Napoleoni.

But what happened next is, no doubt, a delicious reversal of fortune for Amanda Knox and her supporters to watch.

Instead of dropping the charges against Napoleoni, the Perugia prosecutor appealed the judge's "no evidence" opinion, leaving Napoleoni under a cloud of suspicion to this day. And Napoleoni's reaction? She told the media, it was "unjustified aggression toward me by the prosecutor" and a "totally subjective interpretation of the facts."

Could Napoleoni be right? After her lengthy connection to the Kercher case, who better to know when a prosecutor engages in "unjustified aggression" and "totally subjective interpretation of the facts." The only thing left to wonder is, is there an Italian phrase for "if the shoe fits, wear it'?