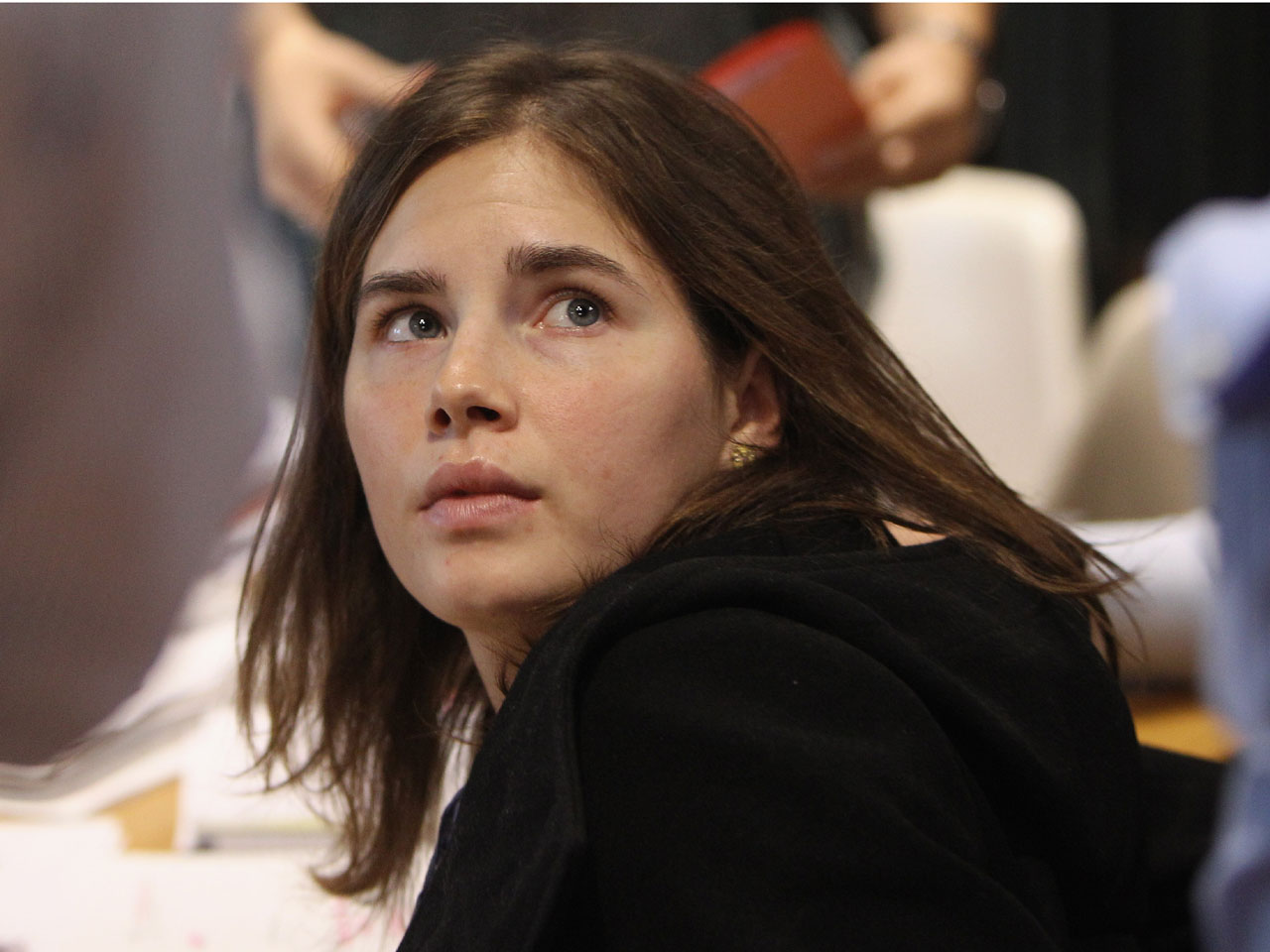 PERUGIA, Italy - After four years in prison and convicted of murder, Amanda Knox has a chance at freedom Monday when an appeals court decides if she killed her British roommate — a case that made Knox an unwilling celebrity and placed Italy's justice system under scrutiny.

Knox and her co-defendant Raffaele Sollecito are expected to make a final case for their innocence as the appeals trial wraps up and the eight-member jury begins deliberating whether their 2009 convictions and prison sentences — 26 years for Knox, 25 years for Sollecito — should stand, be dismissed or altered.

The 24-year-old Knox looked tense as she entered a packed courthouse. She is expected to address the court in a final plea of her. A verdict is expected later Monday.

Sollecito made his appeal to the court first, saying he was in an "idyllic situation" on the day of the murder. He had met Amanda just days earlier, was preparing to read his thesis, and was looking forward to spending his first weekend with his American girlfriend.

"It was our desire to leave the world outside and spend the night together," Sollecito told the jury and the judges. He showed a bracelet with "Amanda and Raffaele Free" written on it. He said it was now time to take it off, as a symbol of the "long black tunnel" he and Knox had been through.

The trial has captivated audiences worldwide: Knox, the 24-year-old angel-faced American, and Sollecito, the bespectacled Italian who was once her boyfriend, were convicted of murdering fellow student Meredith Kercher in what the lower court said had begun as a drug-fueled sexual assault.

"It's such a shock to send your child to school and for them to not come back," Kercher's mother Arline said in court in the original trial. She, her other daughter and one son are expected to be in Perugia, a central Italian town, for the verdict.

Knox and her family hope she will be set free after spending four life-changing years behind bars as an innocent caught up in what they say is a monumental judicial mistake. Prosecutors, who have depicted Knox as a manipulative liar, are seeking to increase her sentence to life in prison.

For the Kercher family, Monday's verdict is a chance at justice for the 21-year-old student, who was living with Knox at the time of her slaying.

"They will be here Monday and they will look at you just one time," the family's lawyer, Francesco Maresca, told the jury in his final words in the case. "With that single glance, they will ask you to confirm the truth."

The case has spurred countless articles, books and even movies, and brought the Italian judicial system under a harsh spotlight in the U.S., where many believe the Seattle native was wrongly convicted. At the time of the original verdict, there were suggestions of anti-Americanism that even dragged in U.S. Secretary of State Hillary Rodham Clinton.

With huge media interest in the case, the verdict by the jury — which is made up of the presiding judge, a side judge and six jurors, five of them women — will be broadcast live.

The jury has several options as they go into deliberations: They can acquit both defendants and set them free. They can uphold the conviction and confirm the sentence, reduce it or increase it. They can theoretically decide to split the fate of Knox and Sollecito, convicting one and acquitting the other. Presiding Judge Claudio Pratillo Hellmann is expected to lead the discussion.

Kercher's body was found in her own bedroom in the Perugia apartment she shared with Knox on Nov. 2, 2007. Photos of the crime scene shown by Maresca to the court in the final days of the appeal showed her chest bared, her face and neck covered in blood — a powerful reminder of the brutal nature of the crime.

Four days after her body was found, prosecutors arrested Knox and Sollecito, as well as a Congolese man implicated by Knox during police questioning and later cleared. That false accusation against Diya "Patrick" Lumumba remains one of the most powerful arguments in the prosecution's case against Knox, though the American maintains she acted under police pressure during an interrogation where she had neither a lawyer nor a proper interpreter present.

"An uninhibited young American — she was the perfect culprit," Giulia Bongiorno, a defense lawyer for Sollecito, told the court in her final arguments. "When you want to solve a crime in four days, it's haste."

Knox and Sollecito were convicted and sentenced after the court deliberated for 13 hours. They have always denied wrongdoing.

Over the course of the appeals trial, their positions significantly improved, mainly because a court-ordered independent review cast serious doubts over the main DNA evidence linking the two to the crime.

But the independent review — ordered at the request of the defense, which had always disputed those findings — reached a different conclusion.

The two experts found that police conducting the investigation had made glaring errors in evidence-collecting and that below-standard testing and possible contamination raised doubts over the attribution of DNA traces, both on the blade and on the bra clasp, which was collected from the crime scene 46 days after the murder.

The review was crucial in the case because no motive has emerged and witness testimony was contradictory and, in some cases, flat-out unreliable. It was a huge victory for the Knox camp — "She's breathing for the first time in years," Knox's mother Edda Mellas said at the time — and a potentially fatal blow for the prosecution.

Sensing danger, prosecutors spent several hearings and a significant portion of their closing arguments to refute the review, attacking the experts as unqualified, standing by their original conclusions and defending the work of forensic police. They challenged the experts to show exactly how the alleged contamination took place and said there is no scholarly consensus of the minimum amount of DNA required in order for a test to be admissible.

They also pointed to what a prosecutor, Manuela Comodi, called "gigantic, rock-solid circumstantial evidence" that contributed to the original convictions:

-There was a staged burglary in the apartment, used to sidetrack the investigation.

-Knox made contradictory statements early on, saying she was home and had to cover her ears to block out Kercher's screams while Lumumba killed her. Lumumba, who owned a pub where Knox occasionally worked, was jailed for two weeks as a result of that claim.

-On Nov. 2, 2007, Knox called her mother three times, including one call that took place before Kercher's body was found and when it was the middle of the night in Seattle.

-There was no activity on Sollecito's computer that night, even though he maintained he used it during the hours in which Kercher was killed.

The prosecutors do acknowledge the lack of motive, but said many murders that aren't premeditated often happen without a motive.

"They killed for nothing but they did kill; they are young but so was Meredith," Comodi told the court as she wrapped up the case. "They deserve the harshest penalty, which luckily in Italy is not the death penalty."

A third person was convicted in the case — Rudy Hermann Guede, a small-time drug dealer and drifter who spent most of his life in Italy after arriving here from his native Ivory Coast. Guede used to play basketball near the crime scene and was a passing acquaintance of Knox.

The courts that convicted him say Guede took part in the assault, leaving traces of DNA on the victim and at the crime scene. Guede was convicted in a separate fast-track procedure and saw his sentence cut to 16 years in his final appeal.

Defense lawyers maintain that Guede was the sole killer, while prosecutors say that bruises and a lack of defensive wounds on Kercher's body prove that there was more than one aggressor holding her into submission.

Guede says he is innocent, though he admits being in the house the night of the murder. Taking the stand during the appeals trial, he said he believes Knox and Sollecito are guilty.

The pair insist they were at Sollecito's house the night of the murder, watching the French movie "Amelie" on Sollecito's computer, having sex and smoking pot.

Their defense maintains that a perverse sexual game is an implausible scenario for two people who had been dating for just six days and were infatuated with each other. They point to the lack of their traces in the crime scene, saying that the defendants could not possibly have cleaned up their traces but left Guede's. Knox's defense notes she could have left the country in the aftermath of the killing, but said she decided to stay to help out investigators. They also say the kitchen knife, found at Sollecito's house, is not the murder weapon.

What gives the defense hope is the DNA review, which took most of the appeals trial and is a formidable argument for their side. "Today there's very little left. A clue is not enough," Knox's lawyer Carlo Dalla Vedova said.

The appeal has lasted virtually as long as the original trial, and has had its share of bizarre moments. One witness for the prosecution called himself a heroin addict and referred to forensic police wearing white overalls as "extraterrestrials." Though the man, Antonio Curatolo, insisted heroin isn't a hallucinogen, his claim that the defendants were at the crime scene the night of the murder was easy to attack.

Defense witnesses were equally improbable. One was a notorious child murderer, another a Neapolitan mobster who, in a thick accent, claimed his brother had killed Kercher — only to retract it later.

Through it all, Knox has been at the center of attention. To her accusers, she is a she-devil, a seductive liar gone wild in Perugia. Carlo Pacelli, Lumumba's lawyer, even called her a witch. Her defense says she is an innocent, naive and faithful woman whose relationship with Sollecito was tender and at times even childish.

Over the course of the 10-month appeal, Knox has slimmed down, dressed more conservatively and appeared more somber than during the original trial. She would sometimes take notes, sometimes exchange words with her lawyers or glances with Sollecito. A snapshot caught her winking at Sollecito, but at other times she appeared tried by what was going on around her.

In May, she gave a passionate defense, telling the court she was innocent and broken by life in jail.

"I'm very sorry Meredith no longer lives ... I can't possibly know how you feel, but the idea of losing my sisters terrifies me," a tearful Knox said, her voice breaking.

Prosecution and defense all agree that the case has generated obsessive media attention on both sides of the Atlantic. One defense lawyer lamented Knox had been "crucified" in the media, her privacy violated. Giuliano Mignini, the prosecutor involved in the case since the beginning, told the court to protect the honor of the country and not give in to the media campaign in favor of Knox.

It's not the first time a nationalistic touch has entered the case. At the end of the first trial, a U.S. senator from Washington state, Maria Cantwell, raised suspicions of "anti-Americanism" at play, saying at the time she'd bring her concerns to Clinton. Despite the media hype, the case never really strained relations between Italy and the U.S.