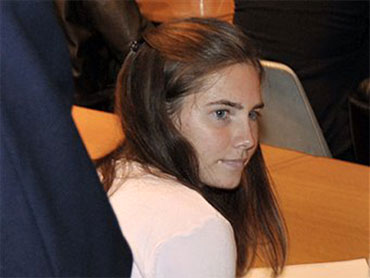 A lawyer representing the family of a British college student who was slain in Italy is seeking euro25 million ($37 million) in damages from an American and two other defendants accused in the 2007 killing.

Lawyer Francesco Maresca said in court Friday that the family of 21-year-old Meredith Kercher is seeking the compensation from Amanda Knox, of Seattle, co-defendant Raffaele Sollecito and Ivorian Rudy Hermann Guede, who was convicted in a separate trial. They all deny wrongdoing.

Prosecutors have asked the eight-member jury in Perugia, Italy, to give Knox and Sollecito a life sentence. A verdict is expected next week.

Kercher's body was found in the apartment she shared in the central Italian city of Perugia with Knox on Nov. 2, 2007. Prosecutors believe the Briton was the victim of a drug-fueled sex game.

Knox and Sollecito, who have been jailed since shortly after the slaying, were in court Friday, as well as their families.

After making his closing remarks, Maresca acknowledged to reporters that the three defendants would not be able to pay some $12 million each. He said the amount requested was "symbolic" because human life is invaluable.

During Friday's sessions, damages were sought also for Diya "Patrick" Lumumba - a Congolese man who owns a Perugia pub where Knox worked and whom the American initially accused of being the killer. Because of her accusation, Lumumba was briefly jailed. He was later cleared and is seeking defamation damages from Knox.

Defense lawyers will make their closing arguments in the next sessions.

"The lawyers of the civil plaintiff are on the same side as the prosecutor, but with the same problem: they both lack evidence, " said Knox lawyer Carlo Dalla Vedova. "We are serene, and we are ready to explain our positions."