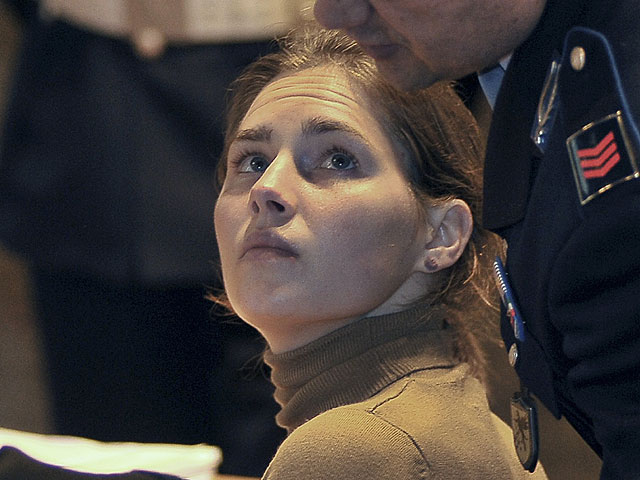 (CBS) - An independent journalist of very modest means is at home in his apartment. Five police officers enter. No warrants, no badges shown. The journalist is handcuffed then beaten. He's brought before a court where police ask that the journalist be declared insane because of his coverage of a high-profile case.

Where did this take place?

None of above. It happened in Italy last September and the journalist's name is Frank Sfarzo, he lives in Perugia.

A. Leaking a top-secret Italian defense report to Wikileaks.
B. Publishing a woman's tell-all about one of Silvio Berlusconi's parties.
C. Investigating the latest game-fixing scandal in Series "A" soccer.
D. Reporting on the Amanda Knox case in Perugia

Only in Perugia, could the correct answer be "D".

Frank Sfarzo writes a blog, Perugia Shock, about developments in the Amanda Knox case. She is the American student from Seattle who was convicted of killing her roommate in Perugia in November 2007. Knox is currently appealing a 26 year prison sentence in Italy.

Yesterday, the New York based Committee To Protect Journalists wrote a letter to Italy's President Georgio Napolitano expressing concern about the continuing harassment of journalists covering the Knox case in Italy. The Committee complained that journalists had been threaten and harassed by police and prosecutors in Perugia for the past several years; the worst case being Sfarzo's.

According to the Committee, on September 28, 2010, five police officers from Perugia's swat-like team, Squadra Mobile, entered Sfarzo's apartment without a warrant. The Committee says police used excessive physical force on the journalist as he was handcuffed and taken away. Sfarzo was brought before a judge and the police asked that Sfarzo be "certified" insane. As evidence of his mental illness, the Committee says the police showed the judge reporter notebooks that Sfraoz kept about the Knox case. When the judge denied the police request, Sfarzo was jailed.

Sfarzo has been charged with resisting arrest. If convicted, the journalist faces up to six years in prison.

"They jumped in 5 over me, they almost killed me. I'm alive because someone showed up and I managed to scream to call the Carabinieri [city police]...Then I had bruises everywhere, cuts on my arms and crooked ribs."

According to Ognianova, the Committee found that more journalists than Sfarzo were being harassed over their coverage of the Knox case. Ognianove told Crimesider that the police and prosecutors in Perugia were acting like "bogeymen" to frighten the local media into silence, out of "fear of repression from the government".

"It's unbelievable", says Doug Preston, the author of "The Monster of Florence." Preston told Crimesider, "It's like what they do in China, but at least there they hide it. In Perugia, they don't even bother."

Perugia police and prosecutors interrogated Preston several years ago while Preston and his family lived in Tuscany. That interrogation left a lasting memory in Preston's mind about law enforcement methods in Perugia. Preston told Crimesider, "Many of these people are thugs, and a lot of Perugia look aghast at what's been happening. But they don't want to say anything".

The Committee asked Italy's President to ensure that journalists are no longer afraid to criticize Perugia authorities. They also asked the President to get the "politically motivated" case against Frank Sfarzo dismissed.

Frank Sfarzo seems to doubt that will happen. In his e-mail to Crimesider he said, "There's a gang of criminals who can do anything and judges protect them. They can beat, insult, threat, frame, force people to accuse other people or even themselves, destroy evidence, create evidence."