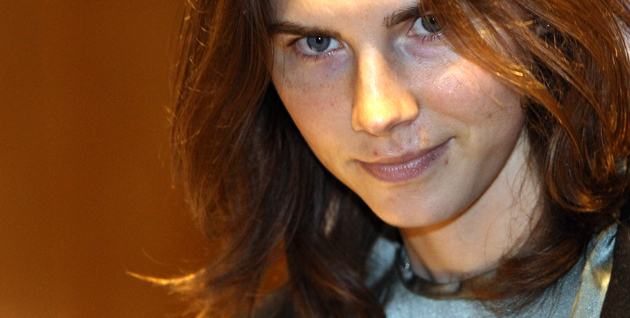 Amanda Knox is speaking to family and friends in a very "healthy, strong and happy voice" now that she's been released from an Italian prison, her friend Giulia Alagna tells "The Early Show."

Acquitted of murder after four years in prison, Knox told Alagna via phone before boarding a flight in Rome that she was very happy to go home with her family.

"We only had a couple minutes to talk, and it was very emotional," Alagna tells "The Early Show" from Perugia, Italy. "Actually, hearing me emotional, the first thing she said was why I was sad. And I explained that I was actually happy for her."

But going back to yesterday's dramatic verdict, Knox's family, Alagna says, did experience some confusion over the court proceedings and the final announcement.

Though the jury overturned her murder conviction, the judge upheld Knox's conviction on a charge of slander for accusing bar owner Diya "Patrick" Lumumba of carrying out the killing of Meredith Kercher in 2007. He set the sentence at three years - meaning for time served - and a fine of 22,000 euros (about $29,000).

"I was in court and the judge first said 'guilty of slander,'" Alagna tells "The Early Show." "But, you know, the family does not understand Italian very well. One of Amanda's friends who was there and who lives here does, Madison Paxton. And she first understood - she heard guilty. She did not hear the word 'slander.' They thought the conviction might have been confirmed and finally 'acquitted' was said and they realized that they were taking Amanda home."

Since the verdict, Alagna says the family has had trouble finding words to express their joy.

"It might sound simple, but 'happy,' 'overwhelmed,' are the most perfect words to express this right now. And that's what they told me."

Half a world away from where she was freed in Perugia, Italy, Amanda Knox's friends in Seattle can't wait to see her.

"Early Show" contributor Hattie Kauffman reports for nearly four years, supporters in Seattle stood by Amanda. It was as if they collectively held their breath as the appellate court verdict was read.

In Seattle, the verdict took a moment to register and then became clear - this was the answer to their prayers.

One of Amanda Knox's many longtime supporters Tom Wright, co-founder of the group Friends of Amanda Knox, addressed Knox and her co-defendant and former boyfriend Raffaele Sollecito following the announcement, "We say congratulations for your courage and your faith. Congratulations for the triumph of your spirit through all you have endured in this crazy and senseless ordeal. To Amanda herself, we say, 'Way to go, kid.'"

On "The Early Show" Wright adds, "She's an extraordinary young woman and she'll be welcomed home with open arms."

As for her family, Wright says, "They have been subjected to a lot of this extraordinary, crazy language of hearing their daughter called a 'she-devil' ... I think they've endured quite a bit. I would say that these last few days - well, the entire four years - they've handled things so, so well. They've been so strong as a family. They've always had someone in Perugia to be there for her, offering her strength."

To help Knox get acclimated to life back in the U.S. and in freedom, Wright says his group plans give her the space and "appropriate" support she needs to make the transition to her life. At some point, he says they'll have a celebration "at a time and place of her choosing."

Wright says, "She's an extraordinary young lady, and I think as the months and years move that other people will discover that the image that put forth by the prosecutor bears resemblance to the actual person."

But even with relief, there was bitterness.

Ted Kibble, a Seattle resident, tells CBS News, "I think it was a travesty of justice and I'm glad that she's out."

There was compassion for Sollecito, and sympathy for the murder victim, Meredith Kercher. But in Seattle, Kauffman notes there is one overriding goal: to see Amanda Knox again.

Margaret Ralph, a Knox supporter from Seattle, told CBS News, "I just want to get her home. I want Amanda home with her family."

The commercial flight carrying Knox and her family is expected to arrive in Seattle Tuesday afternoon or early evening.