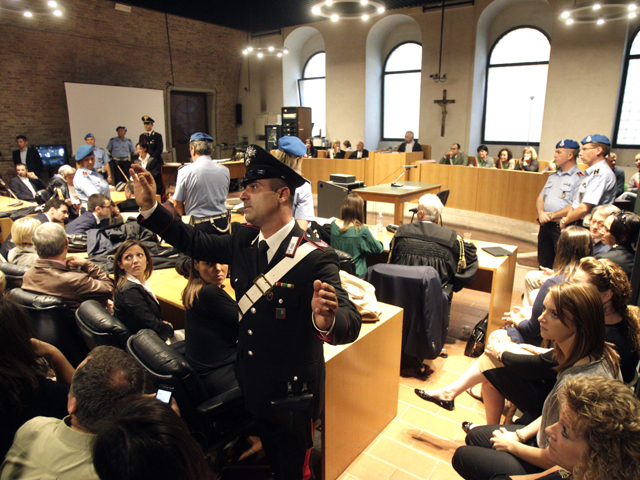 The Amanda Knox case has pointed out some sharp differences between the legal systems in Italy and the United States.

Author Doug Preston, who writes about the Italian court system in the book "The Monster of Florence," tells "The Early Show" that the failure of the Italians to sequester a jury was a key factor in Knox's conviction on murder charges.

Knox, a college student from Seattle, was accused in the 2007 murder of her British roommate Meredith Kercher. She was convicted in 2009 and appealed the case in 2010. Now, jurors are considering her appeal. A judgment is expected late Monday.

Complete coverage: The appeal trial of Amanda Knox
Amanda Knox: "I am innocent"

Preston says, "In this case, the prosecutor...spent a year poisoning public opinion in Italy. ... Since the jurors were not sequestered, they read the newspapers; they talked to their friends, so public opinion plays a major role in jury decisions. And that is why this prosecutor spent a year, you know, leaking information that was damaging to Knox, a lot of it was false. It was manipulated. I mean, this girl was unjustly convicted in her original trial. And now the appeals trial, this has been a much fairer process."

Preston says he believes Knox will be acquitted or convicted on much lesser charges. He says she'll likely be sent home.

"Early Show" co-anchor Jeff Glor notes the prosecutor in Knox's case, Giuliano Mignini, has been convicted of corruption. So why was he permitted to prosecute such a high-profile case?

Preston says, "You're not really convicted in Italy until you're convicted on appeal. And they have been delaying his appeals trial so that he can finish up with Amanda Knox. Obviously, they don't want Italy humiliated in front of the whole world, (having) their chief prosecutor to go to jail in the middle of prosecuting one of the most famous cases in the entire country."

Preston adds that he was a victim of Mignini himself.

"In my book, 'The Monster of Florence.' I talk about (how) he called me into his office, he interrogated me and accused me of being an accessory to murder and suggested I leave the country. He has been convicted of abuse of office, so I can say he's an abusive prosecutor and the case against Amanda Knox was ginned up, it was manipulated and all this has come out during the appeals trial. So she will be acquitted, unless there is some kind of fix in the works, which unfortunately does happen in Italy."

If Knox is not acquitted, Preston says, there will be an "international uproar."

He adds, "There will have to be finally an investigation by the (U.S.) State Department, because this appeals trial has shown that all of the evidence, all of it, the important evidence used to convict her, was not just erroneous or mistaken, but may have been manipulated. It looks like scientific fraud was committed. There really needs to be an investigation."