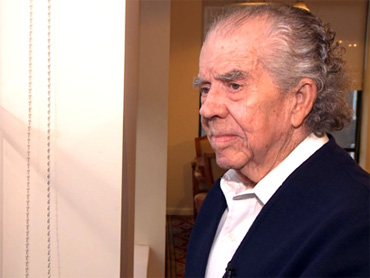 The oldest of the Baby Boomers turn 65 next year. They have a lot on their minds, including health concerns like Alzheimer's. About five million American seniors are now battling the disease. That's expected to increase by 50 percent over the next 20 years.

With no cure right now, spotting the early warning signs are so important to treating this disease.

Dr. Jon LaPook begins a series of reports by CBS News and USA TODAY called "Senior Moment," exploring the aging of an iconic generation and the impact on the nation.

Dr. Max Gomez was a successful obstetrician-gynecologist in Miami, delivering thousands of babies. He lived the good life, but admits he was bad with money.

But Gomez has suffered more than a few bad investments. He is now penniless, living in a care facility paid for by Medicaid.

His son is CBS News/USA Today Series: Senior Moment USA Today: Senior Moment Page"His bank account had been plundered, essentially his life savings were gone," Gomez says of his father. Dr. Gomez's father was not practicing medicine, but still had the title of medical director at a clinic. That clinic made him legally responsible for multiple commercial loans, and took out mortgages in his name. A girlfriend wrote thousands of dollars in checks against his savings account. The FBI started investigating after his ID was used to file millions of dollars in false Medicare claims. "Here he was helpless and being taken advantage of left and right," Dr. Gomez says of his father. He adds, "There's never one big 'ah ha' moment." Patients can seem lucid. Even as, in Dr. Gomez's case, the disease is destroying the brain. In Alzheimer's disease, nerve cells die in key brain regions. One of the first is the hippocampus. Damage to the hippocampus, and later the frontal lobe, affect the ability to plan organize and reason - crucial for managing money. "You can't retain the facts because of memory, and you can't utilize the facts efficiently," explains Mony John de Leon,director of the NYU Center for Brain Health. "It's very hard - as people become deteriorated - to manage finances."

Here's what families can do: assume power of attorney over financial affairs. Set up automatic bill pay and monitor monthly statements. And create a master list of accounts and passwords - to avoid having to call a forensic accountant later on.

Max Gomez says his father still does not remember losing his money. Nor does he admit to having Alzheimer's.

But his son is still sorting out the loss of his father's money, and memory.

Gomez got choked up when talking about his father. "He was my role model, my mentor. I take care of him. It's my job."

Is it a job he ever envisioned having?