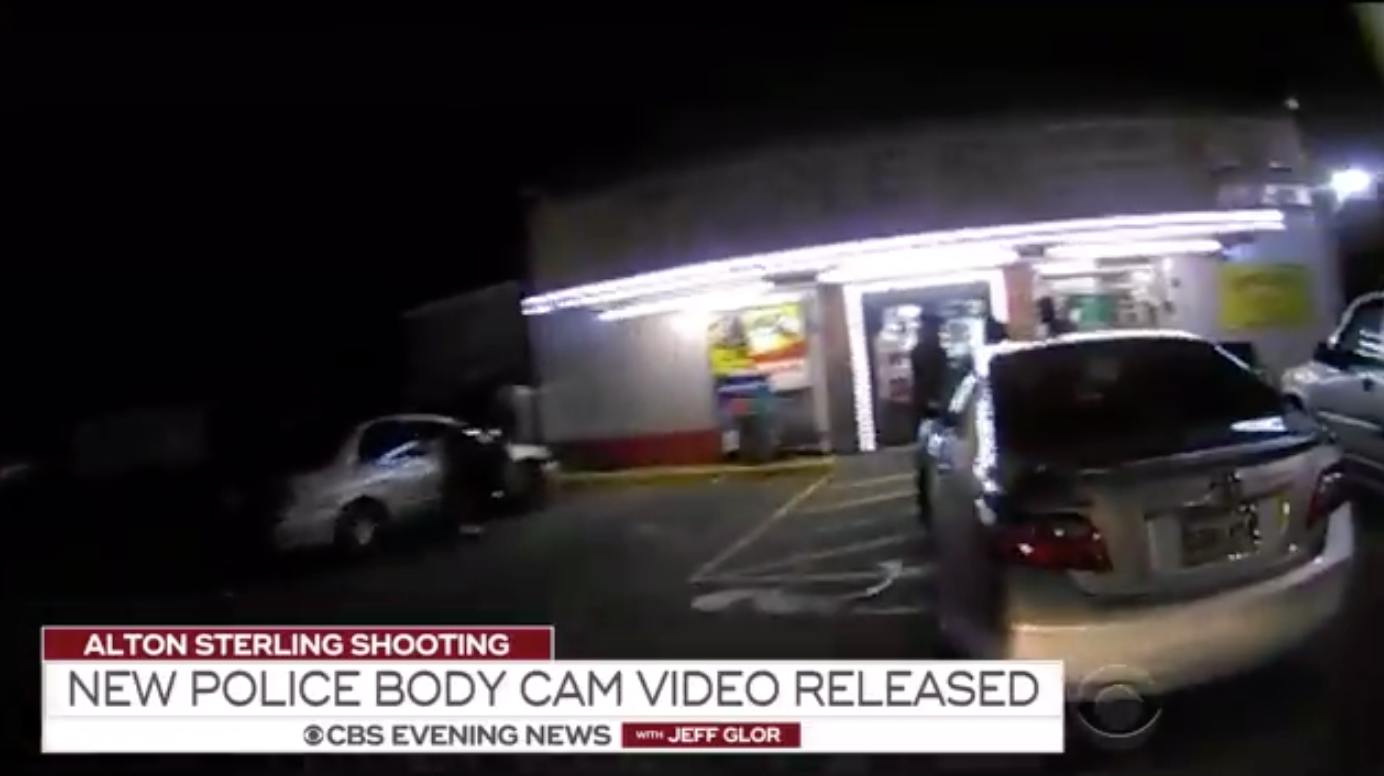 BATON ROUGE, La. -- Kept under wraps for nearly two years, body camera footage of a policeman killing Alton Sterling shows the officer threatening to shoot the man and screaming profanities before firing the fatal shots that stoked protests across the nation.

The videos, released Friday as Baton Rouge's police chief announced the firing of the white officer who shot Sterling six times, came days after the state attorney general declined to bring criminal charges against the two officers involved in the incident.

Monday, a group of protesters  gathered at attorney general Jeff Landry's office, decrying the decision and calling for a special prosecutor to be appointed in the case, reports the Advocate..

The tapes show a police encounter that rapidly turned violent, descending into death threats, a football-style tackle and finally, the killing of a 37-year black man who was selling homemade CDs outside a convenience store in Louisiana's capital city.

Two cellphone videos of the incident quickly spread on social media after the shooting, but the new footage show the clearest and most complete picture of what happened that night.

The videos released Friday include footage from the officers' body cameras and the store's surveillance camera. For nearly two years, Sterling's family and many other Baton Rouge residents have called on authorities to release all of the video footage of the shooting.

The shock of finally seeing and hearing it overwhelmed Andrika Williams, the mother of three of Sterling's children. Williams told her attorney, Michael Adams, that she had an anxiety attack and collapsed when she saw one of the newly released videos in a friend's social media post as she walking in her neighborhood Friday evening.

"Every time they see this footage, they relive this. It's horrible to watch," Adams said.

In July 2016, Officers Blane Salamoni and Howie Lake II approached Sterling in the parking lot of the Triple S Food Mart and ordered him to put his hands on the hood of a nearby car.

As Sterling asks what he has done, the situation breaks down.

"Put your hands on the car or I'm going to shoot you in your (expletive) head," an officer, apparently Salamoni, is heard saying. A gun is pointed at the back of Sterling's head as the officer's orders rise into a shout.

When Sterling complains that the officers are hurting him, one officer tells the other to use a Taser on him and an electric buzzing can then be heard. The officer said to be Salamoni then runs at Sterling, tackling him as the camera footage blurs with motion.

As the men are on the ground, someone yells "he's got a gun." Shots ring out. Salamoni had fired six bullets into Sterling.

The officers recovered a loaded revolver from Sterling's pocket. As a convicted felon, Sterling could not legally carry a gun.

"What that truth is, is the silent complaint -- or the loud one -- of every black person in the inner city who has to deal with an officer like Blane Salamoni," he said. "You can clearly see there was no value placed on Alton Sterling's life by Blane Salamoni."

The video then shows Sterling lying in the parking lot, blood pooling on his chest, his arms moving slightly. As more police begin to arrive, the officer said to be Salamoni asks them to start roping off the area but tells them to leave Sterling where he lies. The officer is heard in the footage calling Sterling stupid.

"He did what he was trained to do," McLindon said of his client.

Salamoni told an internal affairs investigator in September 2016 that he cursed at Sterling to send a message that the officers weren't "playing," according to a report released Friday. Salamoni also said he saw Sterling reach for and hold a gun in his pants pocket right before he shot him during their struggle on the ground.

Trying to explain why he swore at Sterling after the shooting, Salamoni said "he was so mad at Sterling for making him kill him and for trying to kill us," the report says.

Lake, who did not fire his gun but helped wrestle Sterling to the ground, was suspended for three days. Lake's attorney, Kyle Kershaw, said his client wants to return to his patrol job in Baton Rouge after his brief suspension.

Lake answered all of the questions presented at Thursday's disciplinary hearing, Baton Rouge police chief Murphy Paul said. On the advice of his attorney, Salamoni chose not to answer questions, according to Paul.

The police chief said he fired Salamoni for violating department policies on use of force and "command of temper." He suspended Lake for violating only the latter policy.  The pair had been on paid administrative leave since the shooting.

Paul said his decision wasn't based on politics or emotions, but on the facts of the case, testimony and recommendations of board members, but said he takes "full responsibility" for the ruling. Both officers perceived the threat differently, he said -- Lake chose to de-escalate, as officers are trained, and Salamoni did not.

Paul said the video is graphic and "shocking to the conscience." But he cautioned that it only tells "part of the story."

The Justice Department ruled out federal criminal charges last May.