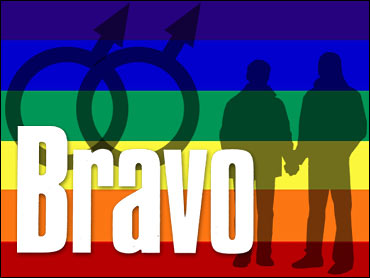 The Bravo cable network is going where no television dating show has gone before: matchmaking gay men.

"Boy Meets Boy," a six-episode series that will premiere in July, also twists reality show conventions by secretly including straight men among the pool of dating prospects.

No dating show, from "Blind Date" to "The Bachelor," has promoted same-sex unions, said Scott Seomin, entertainment media director for the Gay and Lesbian Alliance Against Defamation. It appears "Boy Meets Boy" will handle it in a lighthearted, non-exploitive way, he said.

The show is being made by a gay producer, reality veteran Douglas Ross of Evolution Film & Tape, Inc. "I wanted to be involved with a series I could be proud of," Ross said.

Bravo has scheduled gay-themed programming in the past, airing the "Out of the Closet" film festival for several years, Seomin said. Last summer, Bravo ran a documentary series on same-sex weddings, also produced by Ross.

That series triggered many protests to Bravo about taking a stance on a controversial social issue, Ross said. But it also did well enough in the ratings to be repeated several times, including in a marathon opposite the Super Bowl.

Bravo came back to Ross even though the network underwent an ownership change last summer. NBC bought Bravo this spring from Cablevision Systems Corp.

The series, with Dani Behr of "Extra" as host, will feature a gay leading man choosing from 15 potential suitors. Midway, he will be told that some of his potential dates are actually heterosexual. He won't be told which ones, of course, and Ross is still debating at which point viewers will be let in on the secret.

"We have created a gay world where the straight guys are in the closet," he said.

If one of the straight men is chosen at the end, he wins a cash prize. If the leading man chooses another gay man, the lead character wins the prize and an expense-paid vacation, he said.

"We really wanted to attract the straight population," Ross said. "By adding in this twist, we thought it would bring in a larger audience and would challenge the notions of all of our viewers - both gay and straight."

Bravo President Jeff Gaspin said he wouldn't have been interested in the show without the straight element - not because it was more palatable politically, but because it made the series more unique.

He knew the series would attract attention, something vital when competing with dozens of cable networks. "Honestly, that's the bottom line," Gaspin said.

The Traditional Values Coalition's Lafferty said she will point out to her group's members the connection between Bravo and NBC.

"Just when you think programming can't get any worse, it seems like it drops another 100 feet to an even darker place," she said.

Katie Wright, a spokeswoman for the conservative media watchdog Parents Television Council, noted the show is on a cable channel known for airing edgy material, making it less of a concern than if it were on a major broadcast network. She's interested in what time of day Bravo will air the program, though.

"We will be monitoring it," Wright said.

Gaspin said he realizes that any time a network schedules gay-themed programming, some people won't like it. Bravo is also scheduling a series this summer, "Queer Eye for the Straight Guy," where five gay designers make over the wardrobe of a heterosexual man.

Gaspin noted that "Will & Grace," the comedy with a gay man as a lead character, is one of NBC's most popular shows.

"It's certainly not something we're afraid of," he said. "If done right, it has every right to be on the air."