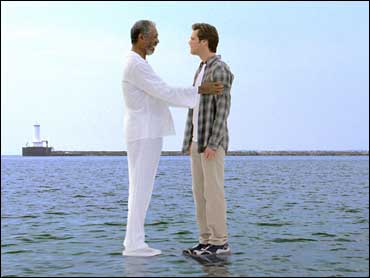 Her phone number, however, is — and that's a problem for the Pinellas Park, Fla., glassmaker.

In the film, the nation's top movie over the weekend, Carrey stars as a regular guy who receives the powers of God (played by Morgan Freeman) after complaining too much about life.

God tries to reach Bruce Nolan, Carrey's character, by repeatedly leaving a phone number on his pager. But instead of the usual 555 prefix most television shows and films use in phone numbers, God's number is a common exchange — too common for Jenkins' liking. It's her cell phone number.

She's been getting about 20 calls per hour, with callers asking for God before hanging up.

"What am I to do?" Jenkins wrote on an Internet forum for visual artists. "I e-mailed Universal Studios about this issue ... I think I want payment."

As an act of mercy, CBSNews.com is not mentioning the number here.

There's not much the telephone companies can do for Jenkins, a Verizon spokesman told the St. Petersburg Times. They offer call-blocking and call-intercepting, but neither is a good idea for a businessperson trying to drum up business.

Reached by telephone, Jenkins declined further comment, saying only she wants to hire an attorney. Officials from Universal Studios did not return telephone calls by the paper Monday, which was a national holiday.

"I may have to change my phone number and it is a custom number," she wrote online. "It could only happen to me."

Jenkins isn't alone in her plight. The number on Carrey's character's pager also matches the one assigned to a South Carolina woman who declined to give her name, but said she's been "getting aggravated to death" by the incessant calling.

It also matches the number for a call center to a group of five Colorado talk-radio stations. Ron Nickel, senior vice president for the Radio Colorado Network, was worried what would happen Tuesday, the first regular office workday since the movie's release.

"My receptionist is going to go crazy," Nickel said.

The network includes KWYD in Colorado Springs, KLMO in Longmont, KSKE in Vail, KDMN in Buena Vista and an FM station in Gunnison whose call letters were not listed on the network's Web site.

It's not the first time real telephone numbers have been given in a movie, although the 555 numbers are much more common. One of the first known instances was in the 1932 film "Helpmates:" Stan Laurel gave his real phone number.

More recently, in 1997's "Good Will Hunting," the phone number printed on the sign for a construction company in the movie is the actual phone number of a company for which Matt Damon worked while in high school.

"Since you're God, if you can name all 31 flavors of Haagen-Dazs ice cream, I'll give you $31,000," one girl told the radio network in a serious tone.

Except it's Baskin-Robbins that boasts of 31 flavors.