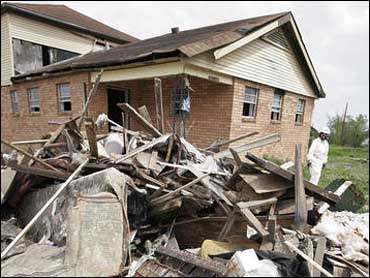 Allstate Insurance Co. must pay a Louisiana man who lost his home to Hurricane Katrina more than $2.8 million in damages and penalties, a federal jury decided Monday in a case that hinged largely on whether it was wind or storm surge that wiped out his house.

"Allstate is shocked with the jury verdict in favor of the plaintiff. Allstate believes it acted in good faith throughout the entire claims process with the Weiss family," she said.

The jury found Allstate — which claimed most of the damage was due to storm surge, an event not covered in its policy — did not pay Robert Weiss enough money to cover wind damage to his home. The verdict included a $1.5 million penalty for the company's failure to pay the claim quickly enough.

"Our intention was to get what we were owed and to send a message that we would not be intimidated," Weiss said after the verdict was read.

Allstate lawyer Judy Barrasso said in closing arguments that Katrina's winds were not strong enough to do the damage. She said Weiss already had received more than $400,000 in insurance payments

"Have you really seen any proof that the damages were in the million-dollar range?" Barrasso asked the jury.

The lawyer for the Weiss, whose home was in the Slidell area on the north shore of Lake Pontchartrain, told the jury in closing arguments that the house was too high above sea level to have been destroyed by Katrina's storm surge. The eye of Katrina passed just east of Slidell on the morning of Aug. 29, 2005.

The lawsuit against Northbrook, Ill.-based Allstate was the second Katrina damage claim to come to federal trial in New Orleans. Hundreds of similar disputes are pending in Louisiana and Mississippi.

In addition to federal flood insurance, Weiss had an Allstate homeowner policy with limits of $343,000 for the dwelling and $240,100 for personal property.

The company, blaming the majority of damage on Katrina's storm surge, paid $29,483 for structural damage and $14,787 for additional living expenses.

Richard Trahant, lawyer for Weiss, argued the house was 17 feet above sea level and that engineering data suggested only 14 feet of surge hit the area. "It never reached the bottom of the house," he said.

Allstate's Barrasso said sustained winds at the house did not exceed 100 mph.

"There was plenty of evidence to show the winds were not strong enough to topple this house and the storm surge was," she said.

Jim Neva, a surveyor and engineer who inspected the house for Allstate, initially told Robert Weiss, who is listed as the policy holder, and his wife, Merryl, that wind may have destroyed the home before the surge of water washed away its remnants.

He later backed off that conclusion, and deferred to engineering consultant Craig Rogers of Rimkus Consulting Group. Rogers, who wrote the final report on the home for Allstate, convinced Neva that storm surge demolished the house.

Rogers said he didn't personally inspect the property until after he wrote the report. He said he based his conclusions in part on evidence gathered by other Rimkus engineers — a practice he described as common. But Trahant questioned the move.

"Why did Allstate elect to rely on the one engineer who never set foot on the property until long after he stamped his report?" Trahant said in closing arguments.

Jeffrey Mika, 30, foreman of the 8-person jury, said the jury was persuaded by Allstate's decision to rely on the assessment by Rogers, who did not personally visit the site.

"We didn't feel that Allstate acted in good faith to settle this claim," Mika said.

Allstate also had claimed the Weisses misrepresented part of the claim.

The company said the couple asked Allstate to pay for a boathouse that was not covered by their policy. The company argued a policyholder who misrepresents even part of a claim voids all coverage.