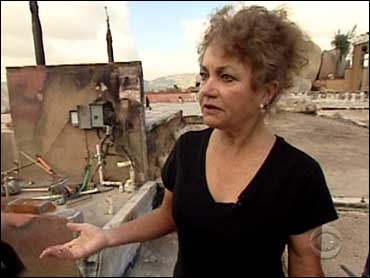 When wildfires swept through Jack and Patricia Bennett's Rancho Bernardo home last October, everything they owned was reduced to ash.

"So many treasures that are gone," Patricia said.

But since they were insured with the "good hands" of Allstate, they thought they'd be able to rebuild quickly, CBS News correspondent Sandra Hughes reports.

"When the demolition crew told us and said, 'you are underinsured,' I said how can we be? We called a year ago to make sure this would not ever happen to us," she said.

Although Allstate has paid the policy limits, the Bennetts say they are still going to be $150,000 short in re-buiding their lives.

And they are not alone. To rebuild their home, Mark Emery and Jeanette Stratton will have to dig deep.

"We really didn't want to have to dig into our savings just to rebuild the way it was before," Emery said.

They contacted their agent to make sure their policy would reflect recent upgrades.

"I called them and told them about the recent changes to make sure that we had the best policy that they had," Emery said.

But their "deluxe plus homeowners policy" has so far only been worth a check for $234,000 - and local contractors say they need at least $500,000 to rebuild.

"We were grossly underinsured, as apparently everybody has been," Emery said.

Consumer advocates claim there is a reason insurance companies want to keep your policy limits and premiums low.

"If they tell you what it really will cost to insure you home you're gonna say, well I'll get back to you. What they'd rather do is low ball. And the person says okay because they trust their agent," said Amy Bach of Policy Holders United.

Fire victims are realizing they are not unique. Time and again, Allstate is accused of leaving customers uninsured and unable to rebuild after disasters.

Allstate has been sued in California, Florida and Texas by policy holders claiming the company uses an unfair business model.

After Hurricane Katrina, Allstate was fined for dropping policy holders illegally. The California Department of Insurance fined Allstate after the Oakland fires of 1991.

"And why did they get fined?" Bach said. "Because so many people were underinsured with Allstate."

"We work with the customer all the way through the process to make sure we are doing everything we can so that they get the full value of their policy," he said.

According to Daniels, of the 200 homes covered by Allstate that were destroyed in last year's wildfires, every homeowner has been paid something - often up to the policy limits.

"Well the fact that we were able to give them their checks within two to four weeks, we are very proud of," he said.

But the homeowners CBS News talked to say the policy limits aren't enough.

Good thing - this could be a battle that rages well into the next fire season.