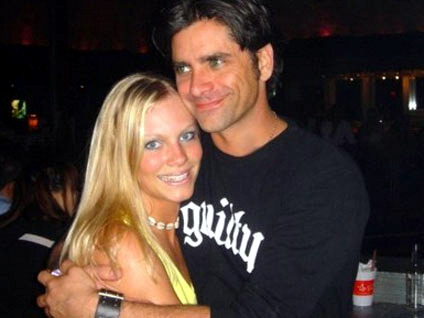 NEW YORK (CBS/AP) Crimesider has obtained an exclusive photo of "Full House" star John Stamos and his alleged extortionist, Allison Coss. The photo, found on a social networking page that seems to belong to Coss, appears to show Stamos and Coss hugging for the camera.

The caption on the photo reads, "First time I met this werido [sic]..."

On Monday, Stamos appeared in a Michigan courtroom Monday to face the 24-year-old Coss and 31-year-old Scott Sippola.

Coss and Sippola have pleaded not guilty to reportedly trying to extort $680,000 from Stamos by threatening to release scandalous photos of the actor that would tarnish his wholesome image.

Stamos testified Tuesday that he was "heartbroken" over the separation from his wife six years ago when he met Coss.

Defense attorney Sarah Henderson claims that Stamos and Coss had a romantic fling back in 2004 when Coss was only 17-years-old.

According to Henderson, Coss was a high school student on spring break in Florida when she met Stamos. Stamos testified that Coss told him she was on "college" spring break.

Stamos allegedly invited Coss and another female up to his hotel room where the pair allegedly snapped photos of Stamos with strippers and doing cocaine, reports E! Online. Stamos, in contrast, testified that Coss and a friend were among several people who came to his hotel room and stayed for a couple hours. He described their time together as "just hanging out" and "socializing."

During this encounter, Henderson claims Stamos made sexual advances toward her client. Coss refused initially, but ended up spending the night in the actor's hotel room and maintained e-mail correspondence with him for a period of time. Stamos described the photos as "flirty" and "friendly" and said he "considered her a friend."

However, the e-mails went from flirtatious to questionably criminal after Sippola learned of the photos and attempted to blackmail Stamos, reports E!.

A rep for Stamos reportedly arranged a cash drop-off for Sippola at a Michigan airport in exchange for the duo's silence, but police were waiting for the alleged extortionists.

Coss and Sippola were arrested and the photos were never made public.

Stamos' attorney, William Sobel, stated the allegations against his client "will not be proven because they are simply untrue."