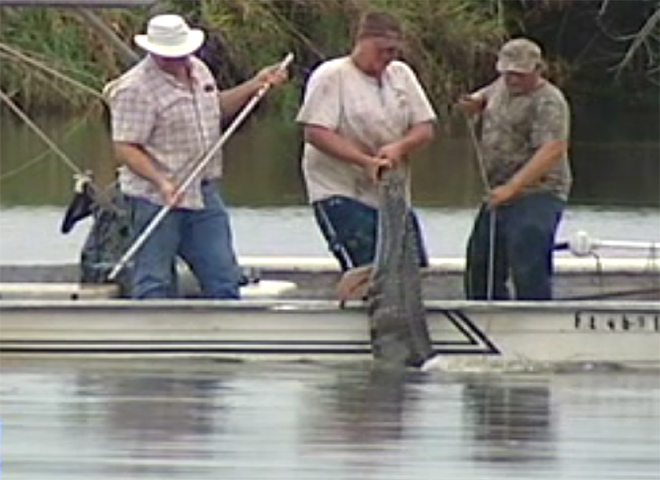 (CBS/AP) MOORE HAVEN, Fla. - An alligator at least 10 feet long lunged at a teenager swimming in a river and bit off the teen's right arm below the elbow, state wildlife officials said Tuesday.

Wildlife officers later caught and killed the alligator and retrieved the arm, but doctors were unable to reattach it.

Kaleb Langdale, 17, was recovering at a Fort Myers hospital. His condition was not available early Tuesday.

"We found the alligator that was responsible," Florida Fish and Wildlife Conservation Commission spokesman Jorge Pino said. "We were able to kill the alligator and dissect the alligator, remove the arm and transport the arm to the hospital to see if the doctors could reattach the limb."

CBS Affiliate WINK reports that Langdale, (also known as Fred), was swimming with friends in the Caloosahatchee River Monday when the gator suddenly attacked.

"The gator was about two feet away from him, just came straight at him," Matthew Baker, who was in the water with Langdale at the time, told WINK.

Baker said Langdale knew exactly what to do: "He's been around alligators all his life, He's smart enough, he knows if he offers him his arm, he won't take his torso. He was smart, he took the risk."

Gary Beck, who was on shore at the time but jumped in to help, told WINK, "As soon as he'd seen Fred, the gator was coming after him, on top of the water, as fast as he could pedal - his tail was wagging back and forth.

Langdale was airlifted to Lee Memorial Hospital as trappers began a three-hour search to find the alligator, and the boy's missing arm. Trappers found the gator, and hauled in several other gators as well.

It's rare for wild alligators to bite humans, Pino said.

"We have millions of people swimming in the state's waterways and nothing happens," he said.

Glades County Sheriff Stuart Whiddon said gator attacks on humans in Moore Haven are rare, though they have been known to go after dogs and other animals.

Since 1948, 224 people have suffered major alligator bites, including 22 fatal bites, according to June 2011 conservation commission data.

Last month, an airboat captain was giving a tour in southwest Florida when a 9-foot alligator bit off his left hand. The Indiana family on the boat said the captain had hung a fish over the side of the boat and had his hand at the water's surface when the alligator bit him.

Wildlife officials say now, just after mating season, happens to be a very active time of year for gators. "Eggs are already laid, but the gators are still very active," FWC Captain Jeff Ardelean told WINK. "Any type of commotion on the water is potential food in their eyes."

Friends say it won't stop them from enjoying the water, especially not Langdale.

"Especially not Fred," Beck said. "He'll be the first person back in."