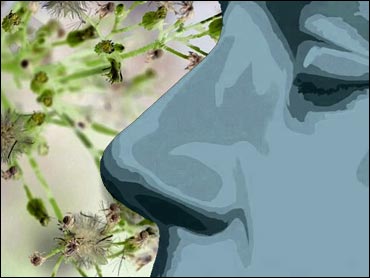 According to researchers, the rates of allergies and asthma have increased. They say this correlates with increasing antibiotic use and possibly relates to the hygiene theory. This may mean that modern practices of sanitation could deprive people of defenses needed to prevent asthma and allergies.

That theory was recently tested on lab mice. First, the mice drank water laced with antibiotics for a few days. This disrupted their microflora — healthy bacteria and fungi found naturally in the gastrointestinal tract. The mice got increasing numbers of fungal inhabitants. Specifically, they had increased amounts of the yeast called Candida, which is commonly seen after taking antibiotics.

Candida, like many other yeast, secrete molecules that affect the immune system's response to allergens.

With their microflora out of whack, the mice were then exposed to allergens. They promptly showed signs of allergic airway disease similar to asthma.

But another group of mice weren't bothered by the mold. Their microflora had been left alone. That suggests that allergies and related breathing problems could start in the gut.

The study didn't stop there. The researchers pushed a bit further to see if genetics or other allergens mattered.

They found that the genes of the mice made no difference, and they saw the same effect with several other allergens (pollens, danders, dust mites, and cockroach feces).

Change the microflora in the gut and you upset the immune system's balance between being exposed to allergens and having a severe reaction to them, says researcher Gary Huffnagle, PhD, in a news release.

The findings could apply to humans.

People need a mix of healthy bacteria and fungi in their guts. Microflora in humans can be thrown off by antibiotics and a sugary, high-fat, low-fiber diet. Swallowing also brings potential allergens to the gut.

The researchers aren't against antibiotics. Instead, they want people to know that eating a healthy diet with lots of fruits and vegetables is important after taking antibiotics to restore microflora as quickly as possible.

The study appears in the January issue of Infection and Immunity.