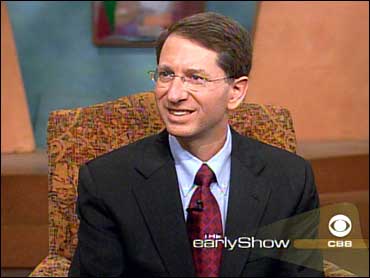 A large survey confirms what many of us already know: Allergies have on a big impact on daily life. They hit more than 40 million Americans each year.

Dr. Michael Blaiss, an allergist with the University of Tennessee Health Science Center, as "exciting" and the most extensive ever done in the United States about the ailments.

He told The Early Show co-anchor Julie Chen Monday that the survey shows 14 percent of the adult population in the U.S. has been diagnosed with nasal allergies, including hay fever, which is also known as allergic rhinitis.

"We've always known about seasonal allergy problems, spring and fall," Blaiss added, "but this survey showed a majority of patients, in fact, suffer with allergies throughout the year. So I think it's very important, as many people think that allergies are a trivial condition. We suffer some in the spring and some in the fall. This survey shows it can be a year-round problem for a majority of sufferers."

People with allergies reported productivity at work at 72 percent when their symptoms are at their worst and 95 percent without symptoms.

The survey was endorsed by the American College of Allergy, Asthma and Immunology and underwritten by a grant from Altana Pharmaceutical.

To treat allergies, Blaiss says, "We usually talk about a threefold approach. One is try to avoid as many things at possible that the patient is allergic to. If they have a pet they are allergic too, ideally, that pet should not be in the home. There are also lots of good medications, such as inter-nasal corticosteroids and antihistamine. For a certain group of individuals, allergin immunotherapy, or allergy injections (shots) to desensitize them to the things they're allergic to," are required.

"I think patients can try over-the-counter medications," Blaiss continued. "If that's not controlling their symptoms, they really need to get to a board-certified allergist to determine what they are allergic to and things they can did to avoid that and get them on proper treatment. So many Americans suffer with this condition. It can lead to other problems, such as sinus disease, ear infections and even worsening asthma."