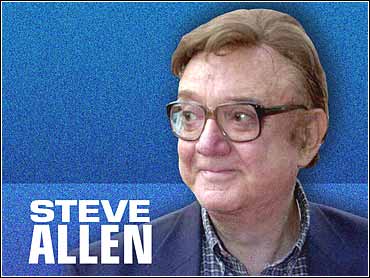 The death of comedian and television pioneer Steve Allen last October was linked to injuries he suffered in a minor traffic accident hours before his death, according to a Los Angeles coroner's report released Friday.

Allen died Oct.30 at age 78 of an apparent heart attack while napping at the home of his youngest son in a Los Angeles suburb after carving pumpkins with his grandchildren and taping a radio tribute to an old friend, satirist Paul Krassner.

A coroner's spokesman said Friday that autopsy results showed that Allen died of a condition known as "hemopericardium."

"There was leakage of blood into the sac surrounding the heart due to a ruptured blood vessel," Los Angeles Coroner's spokesman Scott Carrier said.

"There was a hole in the wall of the heart allowing the blood to leak out. This was a result of Mr. Allen's being injured in a minor traffic accident shortly before his death which bruised the left side of his chest. He already had a heart condition," Carrier said.

Once called television's "Man for All Seasons," Allen was celebrated for his quick wit, horn-rimmed glasses and song-writing skills that saw him compose 8,500 tunes. He also wrote 40 books, plus poetry, newspaper columns, songs and a Broadway review.

In 1953 he made television history by becoming the first host of the Tonight Show, which began on NBC's local New York affiliate WNBC-TV, and he was credited with creating the television talk show.

He was married to actress Jayne Meadows for 48 years.

On the day of his death Allen was planning the promotion of his 53rd book and working on the manuscript for a 54th: Vulgarians at the Gate, about what he saw as an increase in violence and vulgarity in the media.