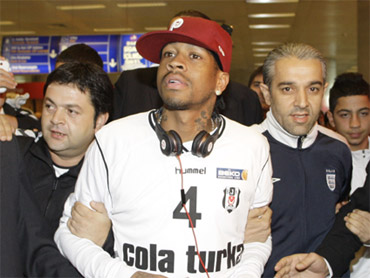 Former NBA All-Star Allen Iverson spouted this tired cliché after a cop pulled over his Lamborghini in Atlanta last week for a traffic violation, CNN reports.

Although he owned the vehicle in question, Iverson, 35, was a passenger at the time. The driver, identified as Antwuan Cilsby in the police report obtained by CNN, was unable to provide documentation for the grey Lamborghini. After being told he couldn't leave until the investigation was complete, Iverson reportedly became "irate" and the officer called for backup.

Although the incident began as a minor traffic violation, as Cilsby allegedly failed to properly signal, upon scanning the car's identification number police found it to have tags that expired in 2009. Iverson then launched into an expletive filled tirade when told that his Lamborghini would be towed.

According to the police report, Iverson said, "take the vehicle, I have 10 more." He continued to say, "police don't have anything else (expletive) to do except (expletive) with me."

The officer said Iverson then, "went on and on about who he was" for 20 minutes.

The cops towed the vehicle, and cited Cilsby for the traffic violation and expired tags.

CNN says that, according to the police report, Iverson later came back and apologized for disrespecting the police.