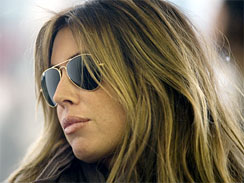 Rachel Uchitel, the woman at the center of an alleged affair with golf great Tiger Woods has come out swinging in her own defense.

CBS News correspondent Bianca Solorzano reported the 34-year-old has hired famed celebrity lawyer Gloria Allred. And though she is not talking much these days, Solorzano said, for years she was a top name in the nightlife scene, partying with the rich and famous at the most exclusive clubs in New York City.

Uchitel ran VIP operations at several New York hot spots, including Griffin, where she met Tiger Woods this past spring.

Steve Lewis, a nightlife correspondent at BlackBook magazine, explained how hosts like Uchitel help their clients, telling CBS News, "The clients contact them and they will take that client and make sure they get a table in the right spot at a club on a night that the club is hot."

But ever since rumors of an affair surfaced last week in the National Enquirer, Uchitel has denied any involvement with Woods.

In an interview with the New York Post, Uchitel accused the National Enquirer of paying their sources for the story $25,000 each, and refused to allow her to take a lie detector test.

She told the New York Post, "There was no evidence. It's just their word against mine, and Tiger's. My statement is, I work in clubs and I am a businesswoman. I do not have sex with celebrities and I have not had an affair with Tiger Woods."

Uchitel first made headlines after the Sept. 11 attacks when she learned her fiancé Andy O'Grady died in the South Tower.

Uchitel told CBS News, "When I think of Andy I no longer cry. I smile and I laugh. I'm at that point now. I can go on everyday knowing that somebody like him chose me to love."

Lewis, of BlackBook magazine, said, "Rachel is one of the premier VIP service people in the industry. She brings big bucks to big clubs."

Uchitel has been seen with David Boreanaz, the married star of the Fox network drama "Bones." However, both Boreanaz and Uchitel have adamantly denied any romantic relationship.

Uchitel says the Enquirer is out to destroy her reputation.

Uchitel told the New York Post, "I knew they were going to slant it that I was this home wrecker, this club girl who was jetting round with Tiger Woods."

Uchitel says her reputation is now tainted and it will destroy any chance she has at love, adding she can't imagine what it must be like for Tiger Wood's wife to read these lies.