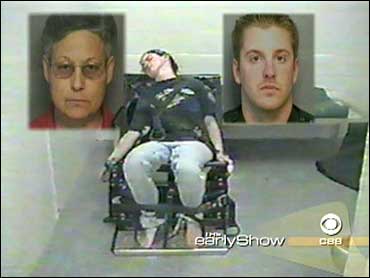 In Flagler County, Fla., a shocking case of police abuse was caught on tape. As CBS News correspondent Harold Dow reports, hearings begin Friday on charges that two jail guards mistreated a 28-year-old woman, who happens to be the daughter of a state prosecutor.

A grand jury described the of the officers' behavior as "grim and shocking."

Lisa Tanner was cited on March 24, 2005, for playing music too loud at her house and was arrested for drunk and disorderly conduct. Lisa says she asked for a breathalyzer test and was refused. She was banging on a window. Police say she was "a possible danger to herself."

Inside her cell, she was ordered to get on both knees. When she refused, four officers entered the cell and tied her down in a device called a "pro-straint" chair.

After officers left the holding cell, she managed to wiggle free from the chair, so they strapped her into the chair again, forcefully.

In the , officers could be seen strapping her down, while she was yelling "I don't know what you're doing!"

Sgt. Betty Miller Lavictoire pinched Tanner's neck while officers worked to tie her back into the chair, which rules state is only to be used "to restrain violent and/or out of control inmates and never as an instrument of punishment."

Lisa appeared to pass out after that. When the officers couldn't revive her, they called paramedics.

Two of the officers — Sgt. Lavictoire and Cpl. Brian Pasquariello — have been indicted by a grand jury and may soon face their own interrogation.

Speaking to The Early Show's Tracy Smith on Friday, Lisa says that while she wasn't seriously injured that morning, "the effects afterwards were probably more of the problem."

Asked if she feared for her life, she says, "Yes. It was scary." After the ordeal, Lisa says she dropped classes, postponing graduation, and is intending to sue.

Meanwhile, her father, Florida State Attorney John Tanner, while not investigating his daughter's specific case, is looking into abuses in the correction system.

To watch the full interview, .

But protesters and law enforcement clashed in the Minneapolis suburb of Brooklyn Center for the third night in a row.