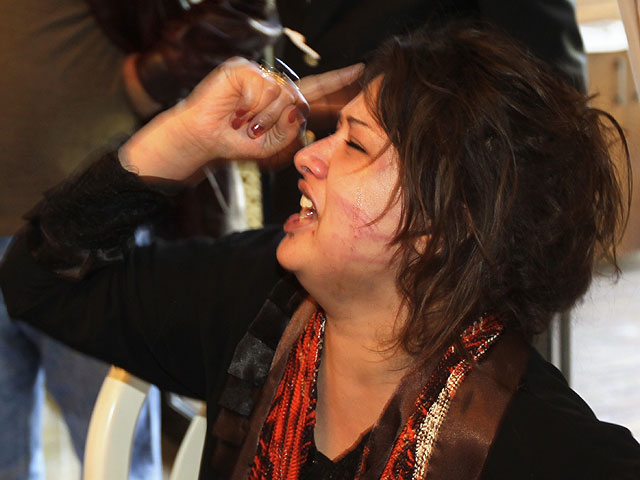 NEW YORK - A Libyan woman who says she is the person who burst into a Tripoli hotel to tell foreign journalists that she had been gang raped by Muammar Qaddafi's troops told a CNN interviewer Monday that she is out of custody but is receiving death threats from regime loyalists.

CNN said it was confident that the woman interviewed is in fact Iman al-Obeidi, who made international headlines on March 26 when she was dragged away from the Rixos Hotel by government agents as she screamed her allegations of rape to foreign reporters.

The CNN interviewer, Anderson Cooper, said the network could not be certain the woman they spoke to by telephone is al-Obeidi, but they were satisfied it was her after days of research and from the testimony of several people who had talked with al-Obeidi at the hotel and with the women interviewed. She spoke in Arabic through a female translator, but was not shown on camera.

The story she told was also consistent with the account al-Obeidi gave at the hotel.

She said, "There is no safe place for me in Tripoli. All my phones are monitored, even this phone I am speaking on right now is monitored. And I am monitored."

"Yesterday I was kidnapped by a car and they beat me in the street, then brought me here after I was dragged around," she said.

"Yes, yes, I want to leave Tripoli. In the middle of the night I get nightmares, and I feel threats 24 hours a day. They are constantly threatening me, with death."

The woman interviewed by CNN said that after the initial hotel uproar, Qaddafi's militiamen bought her new clean clothes and took her to the Libyan TV station to have her broadcast a recantation of her story, to say that the rebels had raped her, but she refused to do so.

"The TV station has no credibility and I was fearing the consequences," she told CNN. "Behind the camera, I was facing 15 Kalashnikovs."

On Sunday and Monday, al-Obeidi did telephone interviews with two TV networks, but she was not seen. A government official said she had an agreement not to talk to reporters, but she was blocked from getting to the reporters' hotel again on Sunday.

The last time al-Obeidi, who is from eastern Libya, which is now in rebel hands, was seen was when she was dragged away from the hotel on March 26. She had gone to the hotel after she said she had escaped her gang-rape ordeal.

She said that Qaddafi forces originally abducted her from a taxi at a checkpoint, repeatedly raped her and held her captive for two days.

"One of them, when my hands were still tied, before he raped me he sodomized me with his Kalashnikov rifle," she said.

"They said, 'Let the men from eastern Libya come and see how we treat their women, and how we rape them, and abuse them."'

She managed to escape after she was untied by another captive, a 16-year-old girl, she told CNN.

The woman who spoke to CNN claimed she was detained and beaten when she tried to reach reporters in the Rixos Hotel a second time on Sunday.

On Sunday a Libyan dissident network based in Qatar played a phone interview where a woman claiming to be al-Obeidi said Libyan authorities had declined her request to join her parents in Tobruk. Tobruk, near the Egyptian border, is under rebel control.

Government spokesman Moussa Ibrahim said al-Obeidi had made a deal with the attorney general not to speak to reporters so as not to compromise her case, and that he was aware that al-Obeidi was trying to reach media on Sunday.

"She broke her agreement with the attorney general by trying to speak to the media and was taken away," Ibrahim told The Associated Press.

Ibrahim said he didn't know what happened to al-Obeidi after she was taken away from the hotel.

Afaf Youssef, a woman the government said is al-Obeidi's lawyer, told The Associated Press on Monday that her client was refusing to speak to reporters because her case was under investigation.

Youssef said she was one of two lawyers taking up al-Obeidi's criminal case against the men who she says raped her. She also denied earlier government claims that al-Obeidi was a prostitute.

Al-Obeidi's rape claim could not be independently verified. The Associated Press identifies only rape victims who volunteer their names.