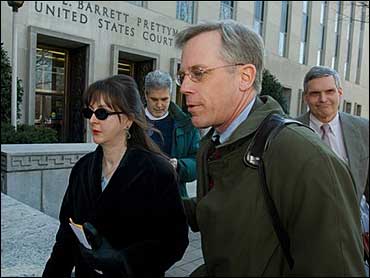 A woman charged with running a prostitution ring in the nation's capital made good on her threat to identify high-profile clients, listing a military strategist known for his "shock and awe" combat theories as a regular customer in court documents Thursday.

Deborah Jeane Palfrey, who is acting as her own attorney, said Harlan K. Ullman, a senior associate with the Center for Strategic and International Studies, "is only one of dozens of such officials" who will be exposed as she prepares her defense.

Ullman declined to talk about the claim in a brief telephone interview with The Associated Press Thursday night, saying "the allegations are beneath the dignity of a comment."

The 50-year-old Palfrey was indicted last month by a federal grand jury on charges of running a high-class call girl ring from her home in Vallejo, Calif. She has denied the escort service engaged in prostitution.

In court records, prosecutors estimate that her business, Pamela Martin and Associates, generated more than $2 million in revenue over 13 years, with more than 130 women employed at various times to serve thousands of clients at $200 to $300 a session.

Palfrey had threatened to sell phone records that would identify 10,000 clients to pay for her criminal defense, but a federal judge ordered her not to release them. But Palfrey gave them to ABC News before the order took effect.

Since federal officials have seized her assets in a civil case involving the business, Palfrey argued in court papers Thursday for the judge to reconsider her request for $500,000 to hire an attorney to replace the public defender.

She contends that she needs a high-profile attorney because of the powerful forces that are lined up against her and her need to subpoena Ullman and others.

Palfrey hopes the customers will testify on her behalf that her escorts did not engage in prostitution.

Prosecutors have accused Palfrey of trying to intimidate potential witnesses by exposing them publicly.

Ullman was the primary author of a 1996 report that coined the phrase "shock and awe," which calls for a massive attack of precision air power that psychologically destroys an enemy's will to fight as much as it destroys the physical ability to fight.

Palfrey said she has 46 pounds of phone records that could expose thousands of clients. Her civil attorney, Montgomery Blair Sibley, said he gave those records to ABC so it could assist in identifying clients who could testify on her behalf.

ABC said it plans to air a story on Palfrey on its prime-time news program "20/20" next month.