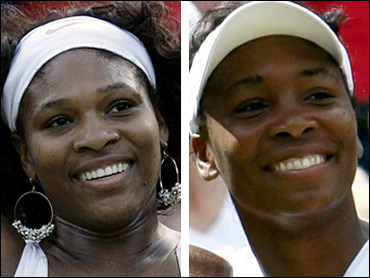 It will be the first all-Williams final since 2003, when Serena beat her older sister in the championship match for the second year in a row.

Serena holds an 8-7 career edge over Venus, including 5-1 in Grand Slam finals. Since Venus won the U.S. Open in 2001, Serena has won five straight of their major finals.

Said Venus: "It's every Williams for themself."

Venus overpowered the fifth-seeded Dementieva in the first set and then prevailed in an error-filled tiebreaker to improve her record to 7-0 in semifinals at the All England Club.

"I am dying for S. Williams to get through," said the 28-year-old Venus, who hasn't dropped a set in five matches and will be going for her seventh Grand Slam title.

Venus then went back out to watch her 26-year-old sister, who sat through rain breaks in both sets before cranking up her big serve, saving a set point in the second set and finishing off the 133rd-ranked Zheng to put her one win away from a ninth Grand Slam crown.

After Zheng dumped a second serve into the net on match point, Serena looked more relieved than anything to get through the match. Venus fiddled with her fingernails as she watched alongside their father, Richard, in the players' box.

"She definitely pushed me," Serena said of Zheng, the first Chinese player to reach a Grand Slam semifinal and first wild-card entrant to get this far at Wimbledon . "Unbelievable, and not only that she played a great game. She played like she had nothing to lose and she didn't.

"I wanted to do more than make a Wimbledon final," she added. "I'm just happy to be back in a Grand Slam final."

Boxing gym knew champ before he was Muhammad Ali