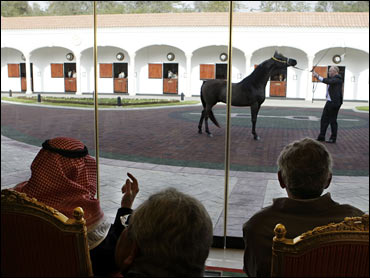 (AP)
President Bush planned to use talks with the Saudi King Abdullah to urge OPEC to open the oil spigot even more. Earlier, the president told a Saudi business group that soaring oil prices are hurting the U.S. economy. The Saudis wasted no time responding. The oil minister said his country would raise production when the markets justify.

The president's overnight accomodations provided an opportunity for him to see how the Saudis spend some of the profits from oil exports to their number one customer, the United States. He is staying at King Abdullah's lavish desert retreat. The president saw some of the king's horses and some of the king's men at the oasis. The Saudis call it a horse farm but it's not a exactly a "farm" by American standards. It's a 2,000 acre country club-like setting about an hour's drive from Riyadh.

The president and his host sat in gilded high-back chairs as trainers led four of the horses. Among them was Alysheba, winner of the 1987 Kentucky Derby. The 24 year-old animal is living in quiet retirement.

Reporters were kept at a distance during the dinner but they spotted the President and his top aides wearing robes during the meal.