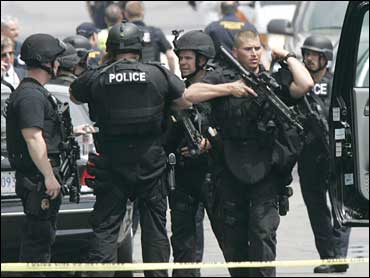 A phone call reporting gunfire — apparently a false alarm — led police to briefly shut down the Capitol Friday and search the largest House office building floor by floor as staff members and a few lawmakers were kept inside.

Officers with rifles stood by outside, and ambulances arrived. But in the end police said there were no arrests, injuries or confirmation of the gunfire report that had been called in by an unidentified congressional employee.

The report originated with Rep. Jim Saxton, R-N.J., his press secretary said. Saxton heard what he thought were gunshots and had a member of his staff call Capitol Police, said spokesman Greg Keeley.

CBS News correspondent Jim Stewart reports that a hammer was mistaken for the sound of gunfire.

A woman stepped off an elevator in the basement garage of the Rayburn Building and heard what she thought was gunfire, Stewart reports. What she did not know was that the elevator next to her was under repair and a maintenance man was on its roof whacking away with a hammer.

"FBI and Capitol Hill police have duplicated the sound and believe that's what she heard," reports Stewart.

"The search of the Rayburn House Office Building has concluded at this time. The building has reopened for routine business," Capitol Police said at midafternoon, capping a day marked by chaos, confusion and a massive law enforcement deployment.

Capitol Police spokeswoman Sgt. Kimberly Schneider said police were investigating a "plausible explanation" that the day's events resulted from noise made by construction workers in the Rayburn garage. "In doing their routine duties, they made some sort of a noise that sounded like shots fired. So it was a valid call," she said.

On high alert, police lined the street between the Capitol and the Rayburn building, rifles prominently displayed, and four ambulances, two firetrucks and other emergency vehicles were on the scene. Police methodically searched the sprawling building, where congressional staff members had locked themselves into their offices as a precaution.

"Right now we want to err on the side of caution," Schneider said before the all-clear. "Lives could be at risk. If we have a gunman in the building we certainly want to find him. It's premature to assume that it may not be a gunman."

The Senate was in session at the time, but the House was not as most lawmakers had left for the Memorial Day recess.

Rep. Peter Hoekstra, R-Mich., conducting a House Intelligence Committee hearing, interrupted a witness to ask those attending the meeting to remain in the room with the doors closed.

"It's a little unsettling to get a Blackberry message put in front of you that says there's gunfire in the building," he said.

Indeed, one congressional staff member was taken to a hospital after suffering a panic attack during the lockdown and search, Schneider said. The woman was released a short time later.

The Rayburn House Office Building was completed in early 1965 and is the third of three constructed for the House of Representatives. It has four stories above ground, two basements and three levels of underground garage space.

Nearly two hours after the first alert, Capitol police sent an e-mail message to occupants of the office building saying they would soon begin a floor-by-floor search.

"During the search, the police officers will knock three times on each office door, announce 'United States Capitol Police,' knock three additional times," and then confirm their identity by speaking a code word, it said.

Usually teeming with visitors, Capitol Hill was uncharacteristically quiet. Although it was the start of a holiday weekend, tourists were few. Independence Avenue, which runs between the Rayburn building and the Capitol, was closed to traffic. Yellow caution tape strung from lightposts cordoned off an area filled with emergency vehicles.

The Capitol itself was all but deserted even though it remained open for official business. Anyone approaching it was asked for identification. No visitors were allowed in. Many lawmakers and staff members had left for a weeklong break.

The lockdown left dozens of people stuck in the Rayburn building for the better part of the day. As the lockdown continued past the lunch hour, staffers in several offices were raiding their refrigerators to settle their hunger. In one office, staffers hunkered down with the doors locked and deadbolted, staying away from the windows as they waited for the building to reopen.

Cathy Travis, a spokeswoman for Rep. Solomon Ortiz, D-Texas, was in his fourth-floor office at 1 p.m. when "four or five really huge, burly young cops did a boom, boom, boom on the front door and walked in."

She said they told her and others to stay where they were and stay out of the way for a search that she said didn't seem to take more than a minute as they checked IDs and all parts of the office.

Steven Broderick, press spokesman for Rep. William Delahunt, D-Mass., was in his car in the Rayburn garage Friday morning getting ready to drive his boss to the airport, when he was ordered by a Capitol Police officer to park the car and put his hands on the steering wheel. The officer then told him to run toward an exit where other officers where gathered.

"He just told me to run and don't look back," Broderick said.

An Associated Press reporter heard noise outside a Rayburn press room and peeked out the door. A police officer, gun drawn, shouted, "Get in the room. Get in the room."

The U.S. Capitol Police Department's Containment & Emergency Response Team maintains an indoor shooting range in the basement of the Rayburn building, according to the department's Web site. Eleanor Holmes Norton, the District of Columbia's delegate to Congress, raised the possibility that noises from a nearby construction site were mistaken for gunfire.

The Capitol building was reopened within an hour, then sealed back off by police, and eventually opened to the public again about 12:30 p.m. EDT.