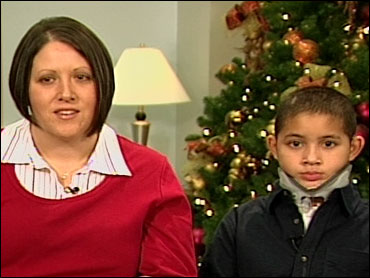 Jordan Taylor is being called a medical miracle.

The nine-year-old Hillsboro, Texas boy was nearly decapitated in a car crash three months ago, but doctors reattached his head to his neck and now he's made virtually a full recovery.

Doctors said Jordan had a one -to-two percent chance of surviving his horrific injury.

"I just kept screaming," his mom, Stacey Perez, recalls. "I just wanted him to wake up."

She was behind the wheel when, authorities say, a dump truck ran a stop sign, plowing into her car.

Jordan was buckled up in the back seat, but the impact caused an unthinkable injury.

"The energy basically made his head lift up off of his neck, and then move forward," explains the pediatric neurosurgeon who saved Jordan's life, Dr. Richard Roberts of Cook Childrens' Medical Center in Fort Worth.

It's called orthopedic decapitation. Jordan's spinal cord remained intact, but his skull separated from his neck.

"All of the connective tissue that essentially keeps your head connected to your neck was destroyed," Roberts says.

"I do remember seeing him in the car and his head was just kinda just hanging down," Perez noted.

Doctors were able to reattach his skull with a metal plate and titanium rods, enabling Jordan to start defying overwhelming odds.

On The Early Show Monday, Perez told co-anchor Harry Smith she wasn't told about the extent of her son's injuries until a week later.

She suffered some significant injuries of her own, but has also recovered.

Roberts told Smith it didn't take long to size up Jordan's condition: "As soon as we saw his radiographs, his MRI CT scan, we knew how bad his injury was, what condition he was in.

"We needed to make sure that Jordan was stabilized, so we first put him into a halo. It's a carbon fiber ring that is screwed to his skull and attached to a vest. And then we took him to surgery. We wound up putting a titanium plate on the back of his skull and attaching that by screws and rods to his neck to keep him connected."

Perez rtold CBS News, "When it first happened, I was waiting to wake up from that bad dream. Now, I don't want to be woken up from this one! It's just been amazing to watch him recover from the brink of death.

"In ICU, they were cautiously optimistic that he was not going to be paralyzed. But the recuperation that he's had was in the transitional care unit (TCU). He started in the wheelchair, then the walker, then he was walking. At first, he wasn't talking at all, and they thought he would have brain damage, and he surprised everyone by regaining all this speech."

Did she accept that Jordan would be paralyzed or brain damaged?

"I would have accepted anything as long as he was alive," Perez replied. "I just wanted him to live. Every time he did something better, I was so happy. It was like icing on the cake. First he talked, then walked, then no brain damage, it was just better news" as time moved on."

Jordan is scheduled to go back to school soon on Jan. 7 or 8. "He's so excited," Perez says. "He can't wait to see his friends. It was great that the hospital had a school, but now he gets to be with his friends and the whole school is excited that he's going to be back."

Roberts told CBS News Jordan's recovery "is exceptional. He's done better than anyone thought he would. His injury is normally catastrophic, fatal, and he managed to survive.

"As far as I'm concerned, he has a full recovery -- he is neurologically intact. He walks -- that's one of the biggest things. He isn't weak and is active; it's amazing. He also has youth on his side. Being young, he has better tissue than someone who is 60 or 70."