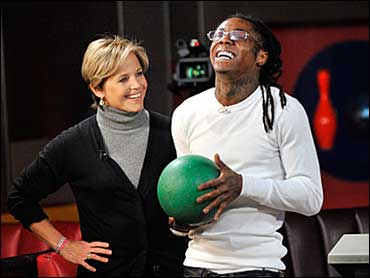 At first look, you might think it's pretty easy to size up Lil' Wayne.

He's got the teeth -- gold and platinum diamond-studded crowns, a body covered in tattoos and the attitude.

Katie Couric: "What does that mean, when you say 'I'm a gangster'?"

Wayne: I don't take nothin' from no one. I do what I wanna do. And I'm gonna do that until the day I die. And if I can't do that, then I'll just die."

This tough-talking rapper insists that what you see is not necessarily what you get. "I have 'misunderstood' [tattooed] on my face because I do feel that a lot of times I'm very misunderstood."

Fans like Justin Timberlake love Wayne because they can sense his fierce independence. They know that in this age of highly-packaged stars, Wayne is an outlaw.

The fact is, Wayne's world allows him the freedom to do what he wants. And guess what he loves? Bowling!

Wayne has been bowling since he was 16 and has four custom-made bowling balls.

But during a trip to the bowling alley with Couric, he humored her by using a house ball and showing off his curve. After a few tries, Couric says Wayne proved to be the better bowler, but not by much.

"If you talk to a professional bowler, he would explain or she'll explain how your own ball and your own shoes and perfect lanes are important," he says.

Even though he's now only 26, Wayne is a music veteran. "Tha Carter III" is his sixth solo album.

Wayne: To me, it hasn't taken a long time. This is supposed to happen. Perfect timing!

Wayne says he started writing songs when he was a child growing up in New Orleans, living in one of the poorest wards. "In New Orleans, reality is handed to you very, very early. That's the difference between New Orleans and everywhere else."

After Hurricane Katrina hit, Wayne remembered where he came from, donating $200,000 to rebuild a neighborhood park where he played as a kid.

He'll perform a song about Katrina during the Grammy Awards.

"And in that song you write, 'I knew some people who were in that pool.' Are you still angry about it?" asks Couric.

Wayne has been expressing himself through his music his whole life.

Wayne, whose shares his real first name, Dwayne, with his father, says that he dropped the D because, "I'm a junior and my father is livin' ...he's never been in my life, so I don't wanna be Dwayne." Asked if his father knows this, Wayne says, "He knows now."

As a kid, Wayne talked his way into a record company where he did all kinds of odd jobs. Then one day a producer took him into the studio.

Wayne: "So I'm in the studio and they put on a beat and I would rap and they kept it. And I put out my first album when I was 12.

Couric: Why do you think your music is really sort of hitting its stride?

Couric: How's the process work? You say, "I'm gonna write a song about..."

Couric: And then you write the words.

Wayne: I don't write anything down. I just record it.

Couric: How do you remember it?

Wayne: That's the best part about it. When anybody asks me that, I always tell them "it's because I really am it.

He's not kidding. Wayne's current tour is called "I Am Music." The words are even tattooed over his right eye. He travels from city to city with two personal buses: one for sleeping and one outfitted with a full recording studio.

The bus gives Wayne the privacy to indulge in some questionable habits, like his thirst for a drink he calls "syrup."

Wayne: It's what you take when you have a very bad cough or flu or something.

Couric: You were pretty addicted to it for a while.

Wayne: It's bad because it messes up your stomach; your stomach hurt real, real bad. It's an excruciating pain, but I got through it.

Couric: So you're not drinking it anymore?
Wayne: Not addicted to it.

Wayne also likes marijuana, saying he uses it medicinally to help with migraines "that make me wanna kill myself."

"I will stand up for marijuana any day... I'm a rapper. That's who I am, Miss Katie, and I am a gangster and I do what I want. And I love to smoke. And I smoke."

The drug may help Wayne's headaches, but it's done nothing for his peace of mind; he's been arrested twice on drug possession charges in the past three years.

As the father of a 10-year-old daughter and a 2-month-old son, does he see himself as a positive role model?

Clearly, Wayne answers to no one. As for the future, he's keeping his options open. He even checked out the anchor desk at CBS News.