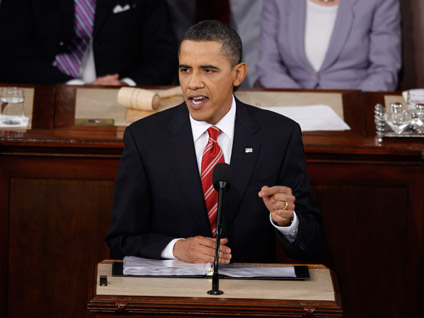 (CBS/ AP)
President Obama took the extraordinary step in Wednesday's State of the Union address of slamming the Supreme Court for last week's decision striking down limits on corporate spending on political advertisements, ruling that the Court had "opened the floodgates" to special interests and foreign corporations in elections.

And it appears that one of the Justices in the audience didn't agree.

As Obama spoke, Justice Samuel Alito shook his head and appears to mouth the words, "not true."

Pretty amazing--both for Obama and for Alito.

But in his speech, Obama was in your face--blasting the Court and urging Congress to undo the decision. Six justices sat in the audience, including Anthony Kennedy, who wrote the decision.

The justices at first appeared inscrutable as Obama spoke and Democrats cheered. That's how they are. They don't stand when others do. They don't applaud. They just sit there and listen. It's why some of the justices just won't go to these speeches, which really are like political theater.

But tonight, we saw something different. As Obama was saying the decision will "open the floodgates" of spending for corporations and foreign companies and other special interests, it appeared it all was too much for Justice Alito to take.

Alito was in the majority that struck down limits on corporate and union spending as violating the First Amendment, and took issue with Obama's characterization. When Obama predicted how the decision would basically ruin the political process, Alito started shaking his head. And that's when he seemed to mouth the words, "not true."

For a night that is the essence of staged theater, this year's State of the Union actually delivered something real. Surprise. There was the fiery attack on the Court from the cool intellectual President, and the subdued defense from the reserved and mild-mannered Justice.