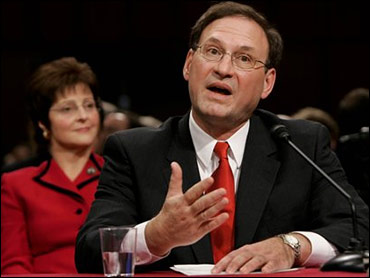 U.S. Supreme Court nominee Samuel Alito moves into the hotseat Tuesday, for direct questioning by the Senate Judiciary Committee, a day after telling the senators who will decide his fate that good judges don't look for partisan outcomes and always "do what the law requires."

"A judge can't have any agenda. A judge can't have a preferred outcome in any particular case," Alito told the Judiciary Committee in a brief statement in which he made a distinction between judges and attorneys working for clients.

Alito, a conservative jurist on the federal appeals court, would replace retiring Justice Sandra Day O'Connor, who has been a decisive swing vote on abortion, affirmative action and death penalty cases. If confirmed,

Before speaking, Alito sat through opening statements by the 18 senators on the judiciary committee, with Democrats focusing heavily on the question of whether Alito would rein in presidential power, reports CBS News correspondent Bob Fuss.

Alito then got his chance to speak and described his Italian immigrant father's background, his mother's work experience and his own academic career. He told the panel about his legal philosophy.

In his 11-minute statement, the judge gave no indication about how he might respond to the tough questions Democrats have promised on the divisive issues of executive power, abortion and the privacy rights.

Alito said his solemn obligation is to the rule of law and that a judge must do what the law requires.

In a prelude to days of grilling, several committee Democrats expressed misgivings about Alito's 15 years of decisions and opinions as a judge on the Philadelphia-based 3rd U.S. Circuit Court of Appeals and his writings during his tenure as a lawyer in the Reagan Justice Department.

"Your record raises troubling questions about whether you appreciate the checks and balances in our Constitution — the careful efforts of our Founding Fathers to protect us from a government or a president determined to seize too much power over our lives," said Sen. Dick Durbin, D-Ill.

The hearings opened amid a growing debate over executive authority and Bush's secret decision to order the National Security Agency to wiretap Americans in the terror war.

"In an era when the White House is abusing power, is excusing and authorizing torture and is spying on American citizens, I find Judge Alito's support for an all-powerful executive branch to be genuinely troubling," said Sen. Edward Kennedy, D-Mass.

Republican Sen. Mike DeWine of Ohio offered a counterpoint. "Your modest approach to judging seems to bode well for our democracy," he said.

The hearings come just months after the Senate confirmed John Roberts as chief justice, and Republicans frequently cited the standard set by Roberts in his hearings for the high court.

Republicans also defended Alito, describing him as a fair-minded and brilliant jurist who would be a welcome addition to the court.

"Sam's got the intellect necessary to bring a lot of class to that court," said President Bush in a good-luck sendoff for Alito at the White House.

Alito, said Sen. Charles Grassley of Iowa, "has a reputation for being an exceptional and honest judge devoted to the rule of law, and a man of integrity."

Alito, 55, introduced members of his family — his wife Martha, his sister Rosemary, who is an employment lawyer, his son Philip, a college student, and daughter, Laura, who is in high school — and then sat and listened to the opening statements from committee members.

Politics loomed large in the confirmation process, but Republican Sen. Orrin Hatch of Utah urged his colleagues to put them aside in assessing Alito's qualifications.

"We must apply a judicial, not a political, standard to this record," Hatch said.

Ten-minute opening statements by the senators — 10 Republicans and eight Democrats — consumed most of the opening session. Specter has called for a committee vote by Jan. 17.

Republican leaders hope for confirmation by the full Senate on Jan. 20, but Sen. Patrick Leahy, D-Vt., would not promise the schedule would hold.

"The same critics who called the president on the carpet for naming Harriet Miers have rolled out the red carpet for you," Schumer said. "We would be remiss if we did not explore why."

Republicans say there is no reason to delay or filibuster Alito. Senators who have met privately with Alito say he told them that his 1985 written comments maintaining there was no constitutional right to abortion were only part of a job application for the Reagan administration, which opposed abortion.

He wrote in a separate legal memo while at the Justice Department that the department should try to chip away at abortion rights rather than mount an all-out assault.

"We will ask you: 'Do you still "personally believe very strongly that the Constitution does not protect a right to an abortion?"' Schumer said.

No matter what Alito says, some Democrats will oppose him, Sen. John Cornyn, R-Texas, predicted.

"I am reluctantly inclined to the view that you and any other nominee of this president for the Supreme Court start with no more than 13 votes in this committee, and only 78 votes in the full Senate with a solid, immovable and unpersuadable block of at least 22 votes against you, no matter what you say or do," the statement said.