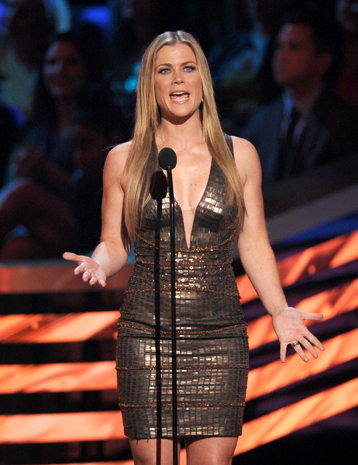 Alison Sweeney has spent her last season as a "The Biggest Loser" host.

"After an incredible run together, Alison Sweeney will not be returning as host of 'The Biggest Loser' next season," the show's producers told ET in a statement.

Sweeney served as host of the NBC reality competition show for 13 seasons, having first joined in 2007 for season 4. Her exit follows that of trainer Jillian Michaels last year.

The former "Days of Our Lives" actress doesn't seem too down in the dumps about her departure. She posted a smiling picture of herself at Disneyland on Tuesday along with the caption, "As always, the #happiestplaceonearth."

Despite leaving "The Biggest Loser," Sweeney will have plenty to keep her busy. Her Hallmark Channel movie, "Love on the Air," is set to air Sept. 26 and her third novel, "Opportunity Knocks," is due out in April 2016.

The 38-year-old actress scored her first Daytime Emmy nomination this year for her role as Sami Brady DiMera on her last season with "Days of Our Lives." After two decades on the soap opera the recognition was long overdue and she dished to ET about what the nomination meant to her. Check it out here.

20 years after 9/11, "Come From Away" brings light in another dark time
More
View CBS News In
CBS News App Open
Chrome Safari Continue
Be the first to know
Get browser notifications for breaking news, live events, and exclusive reporting.