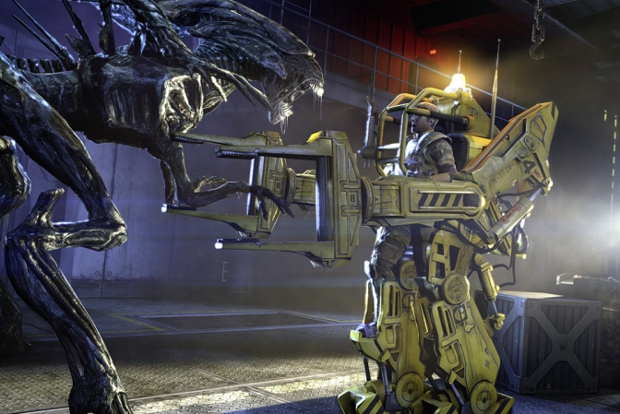 When your source material is rooted in one of the most cherished science fiction horror films, expectations run high for a proper video game counterpart. Couple that with the fact that one of the most respected developers (Gearbox) is crafting the game, and it can become the perfect storm of over hype. Too bad Sega's latest release -- "Aliens: Colonial Marines" -- falls headfirst into this category. Stiff animation, dumb-downed dialogue and poor artificial intelligence (A.I.) hamstring a title that could have been a worthy entry into the "Aliens" universe.

"Aliens: Colonial Marines" picks up right after the events of James Cameron's film "Aliens." There are a number of nods to the source material -- Hadley's Hope, Bishop's dismembered corpse, the motion tracker and power loader. But the most important aspect of the film is no where to be found -- tension. The motion tracker provides a glimpse of impending doom awaiting around each corner, but the Xenomorph's poor A.I. robs the game of any fear it might be trying to generate. Couple that with the lack of difficulty on the normal setting, and any sense of dread is nonexistent.

Some of these shortcomings could be excused if the gameplay rises to the level other Gearbox-developed titles have attained. Unfortunately, this is not the case. The shooting feels generic and uninspired. Guns, other than the shotgun, lack varying degrees of weight and recoil, which leaves the gunplay feeling straightforward. There are the prerequisite of weapons -- pistols, shotguns, assault rifles and submachine guns -- and an upgrade system that allows you to add different attachments to the weapons. Completing each level and performing specific tasks will net you points that allow you to customize each gun. There are also legendary weapons sprinkled throughout the six-to-eight-hour campaign, guns taken straight from the Alien universe like Hick's shotgun and Hudson's pulse rifle.

But despite all these tie-ins to the original fiction, the gameplay feels generic. The Xenomorphs all too often stand in front of you as you open fire. Your allies aren't much better. Occasionally they would obstruct a door I was trying to reach so I opted to open fire on them. They didn't even offer the obligatory pleas to stop shooting that other games' A.I. comrades offer when fired upon. The facial animations were stiff, and the dialogue was little more than testosterone-fueled jargon.

It's a shame because there are aspects of the game that do faithfully recreate some of the atmosphere from the Aliens franchise. The developers were able to use the original score from the films, creating an important level of authenticity. When combined with some of the game's low-lit levels, it can inspire some of the apprehension the films so perfectly captured. But the game's litany of issues rob it of ever feeling immersive.

Multiplayer is another lost opportunity. You can play the campaign with up to four of your friends, but instead of having your co-op partners take over the A.I.-controlled players, the game adds four new soldiers. This further decreases the difficulty against the enemy A.I. while making it more difficult to navigate the tight corridors with the increased number of comrades.

There are four competitive multiplayer modes: Team Deathmatch, Extermination, Survivor and Escape -- the latter of which is the standout. In Escape, two teams (Marines vs. Xenomorphes) of four face off. The Marines' goal is to escape the level before the predetermined 15-minute time elapses. The Xenomorphes are trying to hunt down the Marines before they escape. Then both teams switch sides with the winner being the team that comes closest to escaping. Controlling the Xenomorphes is hit or miss. The clunky movements can make it a struggle track down your foes. This also gives a substantial advantage to the gun-totting Marines, who move more naturally.

"Aliens: Colonial Marines" had a lot of promise. A renown developer using one of the most beloved sci-fi movie series to create a tense, atmospheric first-person shooter sounds like a can't-miss proposition. But poor A.I., shallow dialogue and shoddy gameplay leave more questions about what could have been.

"Aliens: Colonial Marines" rated M for mature by the ESRB and is available on PlayStation 3, Xbox 360 and PC.