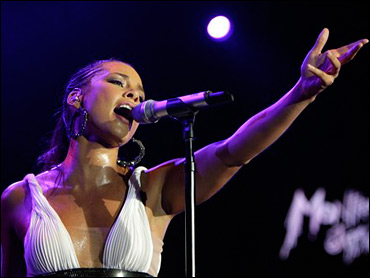 Alicia Keys says her first visit to Africa was so emotional and inspiring that she is ready to take others there to experience something similar.

The Grammy-winning singer is launching a contest through her charity, Keep a Child Alive, that will give five people an opportunity to visit the continent with her. She says her initial trip to Africa "totally changed my life."

"Going to Africa was unbelievable for me," the 28-year-old said.

Keys was to announce the contest Tuesday, which is World AIDS Day, when she performs at the Nokia Theatre in New York's Time Square. The concert will air live on YouTube (8 p.m. EST).

Fans will be able to enter the contest online at the foundation's Web site, or by sending a text. The fee for the text is $5, but it will be donated to Keep a Child Alive.

Keys said the winners, who will travel throughout Africa for five days sometime next year, will visit the people and places that were most influential to her.

"Some will probably not want to come back, some will totally want to stay so that they can be a part of just all this beauty that we're spreading and light that we're spreading. And some will come back and say, `I'll never turn my back,' which is what happened to me," said Keys, who has traveled throughout South Africa (Johannesburg, Soweto and Durban) and Uganda.

At the concert, the entertainer will perform songs from her fourth studio CD, "The Element of Freedom," to be released Dec. 15.

"I find that the more that I'm able to connect with people's life experiences, the more I'm able to make better music," Keys said.