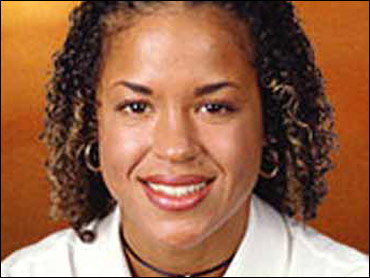 Jerri lives, but not by much.

Personal trainer Alicia Calaway was given the boot with a 5-4 vote, narrowly losing out to Jerri Manthey, in Thursday night's Tribal Council. To hear the council tell it, the vote was a contest between who was more feared and who was more annoying, and feared lost.

"I voted against her because she's strong," Amber Brkich explained of her vote to send the sleek, muscular Alicia packing. "Not only do you intimidate the women around here, but also the men," was another comment about Alicia.

In short, Alicia was voted off because she was perceived to be a threat to everyone else's chances of winning — a real contender for her physical stamina and no-B.S. approach to the game. Another voter said the vote was cast in respect.

She took the defeat stoically, flashing a brief smile. "See you all in three days," was her parting comment.

Alicia finished second among contestants in this week's Survivor "Who's Next To Go" pop question, with 9 percent of the vote cast against her.

For the sixth straight week, bartender and actress-wannabe Jerri was the overwhelming favorite castaway to get the boot, but her numbers did improve a bit. Last week, 84 percent of viewers wanted her out — this week she's dropped to a 70 percent share. Perhaps some viewers are thinking, a la Richard Hatch, the nastiest person will win.

Colby, who had a close call last week, had four percent of the negative votes cast. Keith Famie gathered three percent and Rodger Bingham two percent. Elizabeth Filarski showed up for the first time with one percent of the vote, tying with Tina Wesson and Amber. Tina's numbers have dropped the last three weeks. Could she be the ultimate winner?

One thing is certain: Jerri is beginning to look like a loser. The four votes against her may be a harbinger of things to come, particularly with Elizabeth and Rodger, who described her a "way too loud."

Past surveys have shown that CBSNews.com readers are sometimes right, but usually very, very wrong.

In episode 3, airing Feb. 8, Ogakor members voted out "Mad Dog" Maralyn. Eleven percent of viewers had predicted that. But many more thought that Jerri (28 percent) and Kimmi (25 percent) would be the ones to go. Roger received 8 percent, Michael 7 percent and Jeff 6 percent of the votes. Tina and Keith tied with 3 percent each, as did Nick and Mitchell, with 1 percent of the vote. No one thought that Amber, Alicia, Colby and Elizabeth would be voted out.

In episode 4, on Feb. 15, viewers again incorrectly chose the cast-off. This time, 39 percent of the viewers picked Jerri, up from 28 percent the following week. Kimmi's numbers were a little better at 14 percent, but Roger increased his share of kick-out votes to 12 percent. Mitchell, too, saw his numbers rise — 9 percent correctly predicted that he would go. Keith had 6 percent, Nick had 4 percent and Tina and Jeff tied with 3 percent. Again, Amber, Alicia, Colby and Elizabeth did not get enough votes to register.

On Feb. 22, vegetarian Kimmi was let go by her Kucha tribe-mates. Viewers were still betting on Jerri — 28 percent — (is there some kind of pattern here?), but Kimmi ran a close second with 25 percent of the vote. For the third week in a row, no one voted to oust Amber, Alicia, Colby and Elizabeth.

The results of the pop quiz taken by CBSNews.com readers prior to the telecast on March 1, showed that readers once again felt that Jerri would be the next to perish. She drew 69 percent of the vote. Alicia was next with 7 percent; Tina, Jeff, Keith, Rodger and Michael all drew 3 percent. Nick drew 2 percent; Amber, 1 percent.

Nobody thought Colby and Elisabeth would get axed.

The disparity between who some fans think should be voted off Survivor: The Australian Outback and who actually does get had been growing larger and larger, as the demise of Jeff on last Thursday's show demonstrates.

Jeff Varner, the Internet project manager from New Yor, got bounced after two deadlocked votes between him and Colby Donaldson of Dallas forced a ruling. According to the show's rules, double deadlocks are resolved by a count of votes cast in previous shows, and Jeff admitted to having at least one vote cast against him previously. Colby proudly said he had none.

Ironically, prior to the Tribal Council Jeff and Colby were barely blips on the radar among CBSNews.com readers. Jeff got 2 percent of their vote, along with Tina. And Colby joined Nick, Rodger, Amber and Keith with 1 percent. Alicia got three percent, and Elisabeth — who seems to be developing into America's new Sweetheart — got zero.

And once again, Jerri was the big winner — or is that loser? — a whopping 84 percent of respondents wanted her out, now.