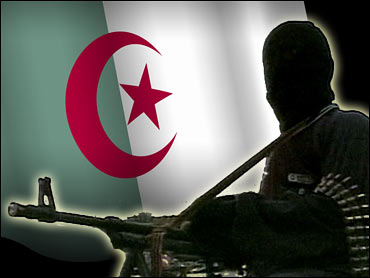 Security forces have killed 120 militants linked to al Qaeda in Algeria over the past six months and arrested 322, the government said Sunday.

Speaking at a police academy diploma ceremony in the capital, Interior Minister Yazid Zerhouni attributed the results to increased security efforts in the North African country since August, when al Qaeda's local offshoot claimed responsibility for a series of suicide bombings that left over 100 people dead.

Zerhouni said another 22 militants gave themselves up, and 150 weapons have been seized. Those in custody include some high-ranking militant chiefs, such as Ali Bentouati — a senior "emir," or commander, for the zone of central Algeria. He surrendered to police in January.

The minister pointed to the combined efforts police, paramilitary, intelligence and military forces used to fend off a resurgent Islamist militancy in Algeria.

The security sweeps are mainly due to "a better penetration of terror support networks and terrorist groups," he was quoted as saying by the state news agency, APS. "This is the proof of evolving intelligence techniques."

He also said enhanced collaboration with former militants, who benefit from an amnesty program if they turn themselves in, was bearing fruit. Some 2,000 militants have surrendered since 2005 when the program began.

Zerhouni said security would be beefed up before the presidential election on April 9. Police forces, currently at about 160,000, will be raised to 200,000 by the end of the year, he said.

The minister's rare comments on security issues came after the local branch of al Qaeda, known by the French language acronym AQMI, claimed responsibility for nine attacks in February that it said killed or wounded 47 people, mainly security forces. Authorities and Algerian media have reported a lower toll.

AQMI rose from the remains of a Salafist militant group in the 1990s, when a near-civil war between secular-leaning government forces and Islamists killed up to 200,000 people. Since joining Osama bin Laden's terror network in late 2006, the group vastly stepped up attacks, but it appears weakened following the latest security crackdown.

Zerhouni has often declared in recent months that militants were being cornered, but his comments Sunday were the first time he quantified police results.

An intelligence official told The Associated Press the country is spending a considerable amount of its budget on security, and it's paying off. The official spoke on condition of anonymity because of the nature of his activities.

Officials point to the fact that AQMI has not conducted a large-scale suicide bombing or an attack in Algiers since the security sweeps expanded in September. But they cautioned that recent police results do not mean AQMI is unable to conduct a large attack.

The sweeps have included police raids in several towns, plus army and air force operations against militant bases in mountain regions east and south of Algiers. The capital remains tightly guarded by army and police checkpoints.