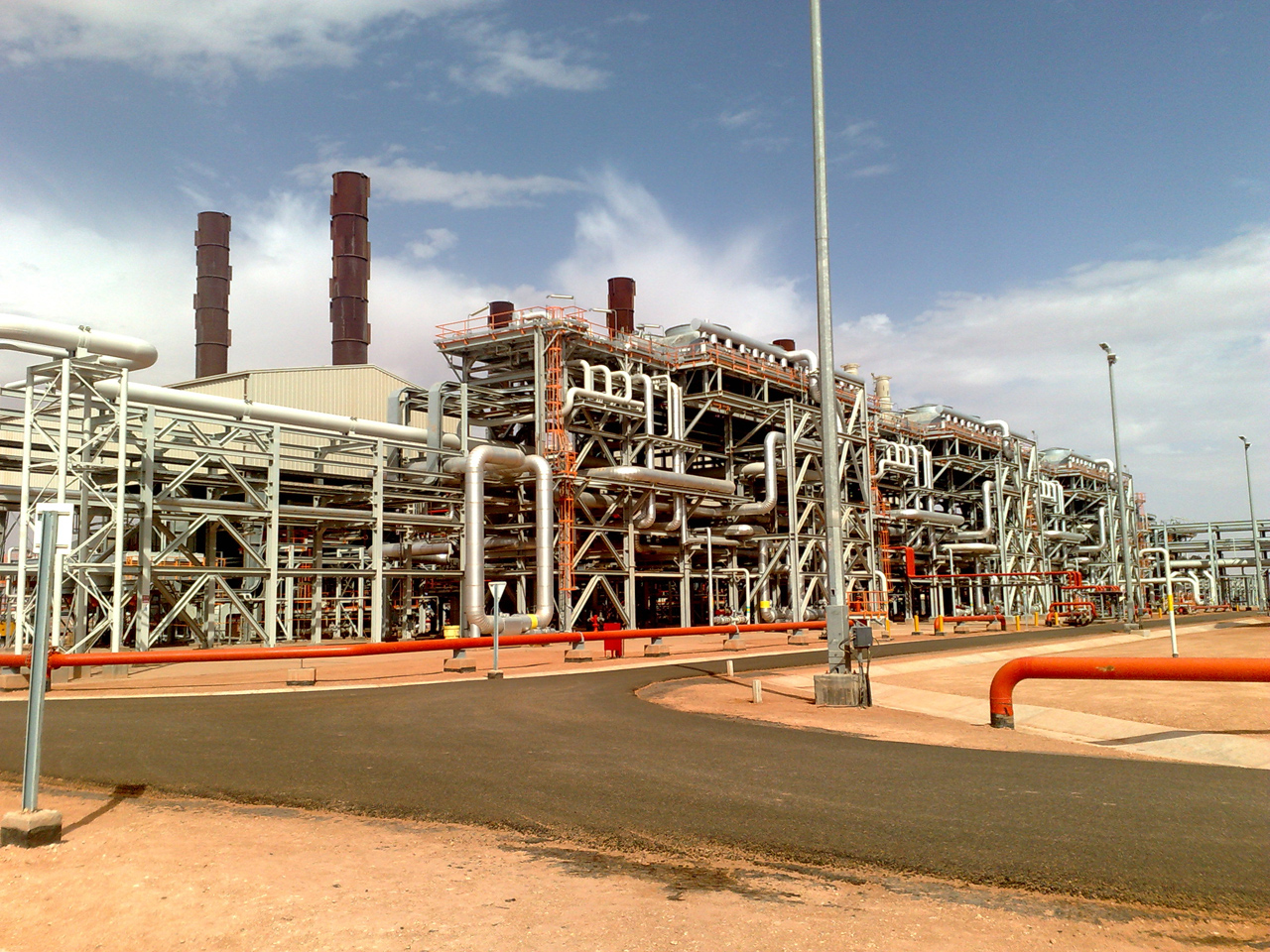 ALGIERS, Algeria Algerian forces launched a military assault Thursday at a natural gas plant in the Sahara Desert, trying to free dozens of foreign hostages held by militants who have ties to Mali's rebel Islamists, diplomats and an Algerian security official said.

Yet information on the Algerian operation varied wildly and the conflicting reports that emerged from the remote area were impossible to verify independently. What did leak out prompted governments around the world to express deep concerns about the way Algeria tried to rescue the hostages, who were from at least nine different countries.

News of the bloody Algerian operation caused oil prices to rise $1.08 to $95.32 on the New York Mercantile Exchange and prompted energy companies like BP PLC and Spain's Compania Espanola de Petroleos SA to try to relocate energy workers at other Algerian plants.

A diplomatic source confirmed to CBS News that the Algerian military had a plan to retake the facility and that there had been casualties among both the terrorists and hostages, including multiple deaths.

A British security source, citing a contact close to the scene, told CBS News "that the Algerians were firing from helicopters at anything that moved," but could not confirm any deaths.

An administration official said it's unclear where the remaining hostages or the hostage-takers were and that the situation is still unfolding, CBS Radio News correspondent Cami McCormick reports.

The Algerian government said it was forced to intervene due to the militants' stubbornness and their desire to escape with the hostages. The communications minister said there were casualties in the military operation Thursday, but gave no details.

"An important number of hostages were freed and an important number of terrorists were neutralized and we regret the few dead and wounded, but we don't have numbers," minister Mohand Said Oubelaid said on national radio. "The operation to free the rest of the hostages still inside (the plant) is ongoing."

A State Department source told CBS News the kidnappers were armed with AK-47 assault rifles and rocket-propelled grenades, and that some had suicide vests.

Islamists from the Masked Brigade, who have been speaking through a Mauritanian news outlet, said Algerian helicopters opened fire as the militants tried to leave the vast Ain Amenas energy complex with their hostages. They claimed that 35 hostages and 15 militants died in the strafing and only seven hostages survived.

Algeria's official news service, meanwhile, earlier claimed that 600 local workers were freed in the raid and half of the foreigners being held were rescued. Many of those locals were reportedly released on Wednesday, however, by the militants themselves.

One Irish hostage was confirmed safe: supervising electrician Stephen McFaul, whose mother said he would not be returning to Algeria.

"He phoned me at 9 o'clock to say al Qaeda were holding him, kidnapped, and to contact the Irish government, for they wanted publicity. Nightmare, so it was. Never want to do it again. He'll not be back! He'll take a job here in Belfast like the rest of us," said his mother, Marie.

Dylan, McFaul's 13-year-old son, started crying as he talked to Ulster Television. "I feel over the moon, just really excited. I just can't wait for him to get home," he said.

In Washington, White House press secretary Jay Carney said the Obama administration was "concerned about reports of loss of life and are seeking clarity from the government of Algeria."

Japan's Prime Minister Shinzo Abe protested the military raid as an act that "threatened the lives of the hostages," according to a spokesman.

Jean-Christophe Gray, a spokesman for British Prime Minister David Cameron, said Britain was not informed in advance of the raid but described the situation as "very grave and serious." French President Francois Hollande called it a "dramatic" situation involving dozens of hostages.

Algerian forces who had ringed the Ain Amenas complex in a tense standoff had vowed not to negotiate with the kidnappers, who reportedly were seeking safe passage. Security experts said the end of the two-day standoff was in keeping with the North African country's tough approach to terrorism.

The kidnapping is one of the largest ever attempted by a militant group in North Africa. The militants phoned a Mauritanian news outlet to demand that France end its intervention in neighboring Mali to ensure the safety of the hostages in the isolated plant, located 800 miles south of the capital of Algiers.

Phone contacts with the militants were severed as government forces closed in, according to the Mauritanian agency, which often carries reports from al Qaeda-linked extremist groups in North Africa.

A 58-year-old Norwegian engineer who made it to the safety of a nearby Algerian military camp told his wife how militants attacked a bus Wednesday before being fended off by a military escort.

"Bullets were flying over their heads as they hid on the floor of the bus," Vigdis Sletten told The Associated Press in a phone interview from her home in Bokn, on Norway's west coast.

Her husband and the other bus passengers climbed out of a window and were transported to a nearby military camp, she said.

"He is among the lucky ones, and he has confirmed he is not injured," she said, declining to give his name for security reasons.

It was then that the militants went after the living quarters of the plant instead of disappearing back into the desert.

Information about the 41 foreign hostages the militants claimed to have — which allegedly included seven Americans — was scarce and conflicting. All were reportedly workers at the plant.

A spokesman for the Masked Brigade said 35 of the hostages died in the Algerian strafing, and told the Nouakchott Information Agency in Mauritania that the seven surviving hostages included three Belgians, two Americans, a Briton and a Japanese citizen.

Earlier in the day before the raid, an Algerian security official said that 20 foreign hostages had escaped. He did not return phone calls after the raid.

The Norwegian energy company Statoil had said three Algerian employees who had been held hostage were safe but the fate of nine Norwegian workers was unclear. Japanese media reported at least 3 Japanese citizens among the hostages and Malaysia confirmed two.

Algerian Interior Minister Daho Ould dismissed theories that the militants had come from Libya, 60 miles away, or from Mali, more than 600 miles away. He said the roughly 20 well-armed gunmen were from Algeria itself, operating under orders from Moktar Belmoktar, al Qaeda's strongman in the Sahara.

Yves Bonnet, the former head of France's spy service, also dismissed the idea that the operation was specifically linked to the French action in Mali due to the amount of organization it involved.

"It was an operation conceived well in advance — spectacular and needing a lot of preparation ... It was not at all an improvised operation," he told the Europe 1 radio. "Simply getting all those people into the desert would take several days."

It is certainly the largest haul of hostages since 2003, when the radical group that later evolved into al Qaeda in North Africa snatched 32 Western tourists in southern Algeria. This is also the first time Americans have been involved.

Mali and al Qaeda specialist Mathieu Guidere said Algeria's decisive response was in keeping with its usual response to terrorism.

"The message is 'We will terrorize the terrorists,'" he said, adding that the Algerian government had prioritized protecting its gas fields throughout the worst of a violent Islamist insurgency in the 1990s.

"They never accept any military help," he said. "They want to do it their way."