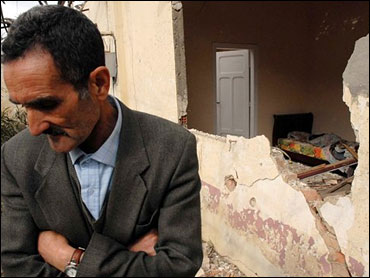 A wave of bombings mostly targeting police killed six people and injured nearly 30 others in Algeria on Tuesday, according to the official news agency and police and hospital staff.

While no one claimed responsibility for the attacks, they bore hallmarks of the Salafist Group of Call and Combat, or GSPC, an al Qaeda-linked Islamic insurgency group. Less than a month ago, it announced that it was changing its name to al Qaeda in Islamic North Africa.

Some of the seven attacks Tuesday morning were car bombings, the APS agency said. Two of the dead were police officers, it said. The agency also reported 13 injured, and said 10 of them were police. Police and hospital staff reported more injured than APS.

In Boumerdes district, 25 miles east of the capital, Algiers, a bomb exploded in the middle of a town, wounding five policemen, APS said. Car bombs struck the center of another town and the police station in a third.

In the Tizi Ouzou district, 55 miles east of Algiers, car bombs killed two policemen in one town and a civilian in another, APS said.

In Boumerdes, doctor Said Lamri said by telephone that his hospital was treating 13 wounded. Police said another 16 people were injured in Tizi Ouzou.

The government did not say who it believed was behind the attacks.

Although whittled down to a few hundred members, the GSPC carries out frequent bomb attacks in Algeria and raises funds in Europe for al Qaeda's operations in Iraq.

In December, the group staged a daring bomb attack on buses carrying foreign workers of an affiliate of U.S. energy services giant Halliburton, killing an Algerian bus driver and wounding nine others.