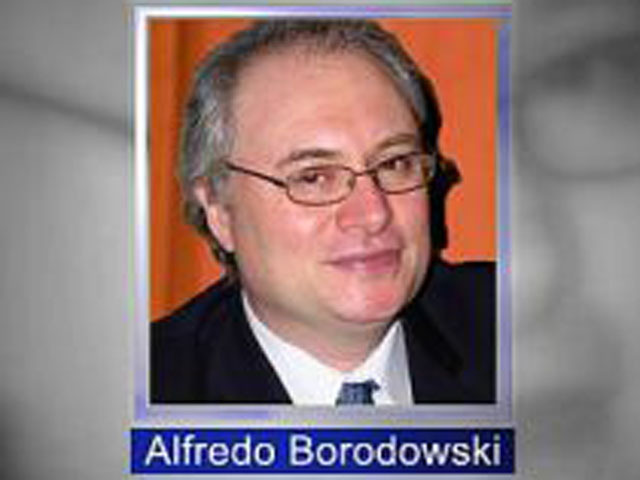 (CBS/AP) MAMARONECK, N.Y. - A respected rabbi has been arrested for allegedly impersonating a police officer after several people complained that he tried to pull them over on the road to rage at them over traffic nuisances.

Rabbi Alfredo Borodowski has been arrested in one case and is being investigated in at least two more in which authorities say the apparent reason for trying to pull people over was to rage at them for cutting him off or driving too slowly.

"That girl was driving too slow and I hate when people do this," the 49-year-old Borodowski told investigators after he was charged with impersonating a police officer in June, when he allegedly pulled his Camry alongside a woman's car in Mamaroneck, flashed a badge and shouted: "Police! Police! Pull over!"

The woman, whose name has not been made public, did not pull over. According to her lawyer, Richard Clifford, the rabbi "just laid on the horn and started screaming at her" as she obeyed a 20-mph limit in a school zone. "She was so freaked out with the horn honking and the screaming that she called police immediately.... I believe my client was in danger with this guy and if she had gotten out of her car it could have escalated."

Borodowski denied to police he was trying to impersonate an officer, saying he was telling the woman only that he would be "calling the police."

Police confiscated the badge, which read: "Triborough Bridge and Tunnel Authority Officer 1338." Judie Glave, a spokeswoman for the Metropolitan Transportation Authority, which oversees the bridge and tunnel authority, said the badge is "totally fake."

Borodowski's lawyer, Andrew Rubin, acknowledged that the rabbi's behavior has been "manic" and said he's suffering from bipolar disorder. The lawyer said the rabbi will plead not guilty in court this week. A previous hearing was postponed because the rabbi was hospitalized.

The rabbi has been fired from a position at prestigious Temple Emanu-El in Manhattan, one of the world's largest Jewish houses of worship. He also leads a congregation in Larchmont.

The odd saga of the rabbi has grabbed headlines in the car-centric suburbs and gained momentum after his arrest, when other drivers came forward saying he had tried to pull them over, too.

When Peter Moses' wife saw the story on the TV news, "She shouted, `Oh my God, the guy who stopped us did it to someone else - and he's a rabbi!" said Moses, a public relations consultant in White Plains.

Moses said that in May, a motorist tailgated him on a drive from Scarsdale to White Plains, "obviously trying to make me go faster" than the 40- mph limit. Instead, Moses slowed, and the driver passed him and then blocked his path.

"Then he's out of his car and he's screaming: `I can arrest you! I can have you arrested!' I said, `Fine, call the police,' then he storms back to his car and drives off."

Moses said his wife asked him not to report the incident but changed her mind when they learned of the arrest in Mamaroneck. "What we want is for the rabbi to get the emotional help he so obviously needs," he said.

Yet another driver handed State Police a video of a confrontation in late April on Interstate 87 near Yonkers. The man told authorities that he swerved in front of a driver who then flashed a badge and demanded that he pull over.

Police are not releasing the video, but a still image from it obtained by The Journal News shows a man who looks like Borodowski sticking his head out of his car window, his wispy graying hair blowing in the wind, who appears to be shouting and waving a silver badge in a leather case.

"He was holding up this tiny badge, and I knew the guy could no way be a cop in any sense of the word," the driver, whose name has not been made public, told the newspaper. When he challenged the man, he drove off.

The three complaints prompted the trustees of Temple Emanu-El to dismiss Borodowski as executive director of the Skirball Center for Jewish Learning "in the best interests of the congregation," said Mark Weisstuch, administrative vice president.

Borodowski was still listed as rabbi on the website for Congregation Sulam Yaakov in Larchmont. A call to the synagogue there was answered by a man who said: "No comment. That's his personal life."