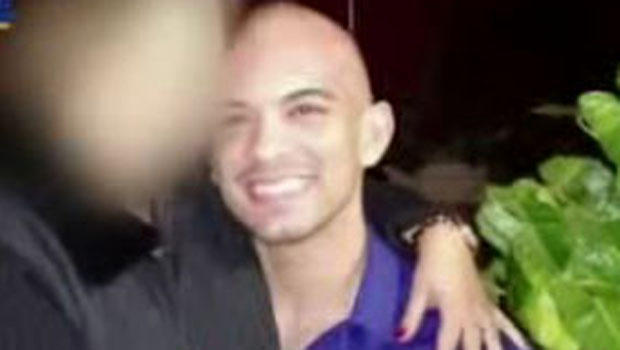 MIAMI — A Miami Police officer is under arrest, accused of using the power of the badge to take advantage of a 19-year-old woman who was walking home.

CBS Miami reports that on Thursday, Miami Police Chief Rodolfo Llanes issued a statement on the arrest of Officer Alexi Figueroa. They said Figueroa's arrest came after a joint investigation between Miami-Dade Police and the Miami-Dade State Attorney's Office.

Miami-Dade Police arrested Officer Figueroa on charges of false imprisonment and simple battery after the 27-year-old surrendered to police on Wednesday. He has since been released on a $22,000 bond.

The charges stemmed from an incident from about a year before in North Miami-Dade County while the officer was in uniform, in his police cruiser and off duty.

According to court filings, back in January 2016, the 19-year-old woman was walking home from a store when she noticed a marked police car making a U-turn and start heading towards her near NW 7th Avenue and NW 80th Street.

That's when investigators said she continued walking towards her home and had a second run-in with the same officer when the marked police car stopped in front of her on NW 7th Avenue.

While she was in the car, the girl says the officer started "talking to her inappropriately as if he was interested in some type of sexual encounter with her." Moments later, she says he asked if she wanted to be "friends with benefits" and later proceeded to lean over and kiss her on the mouth and reach his hand down her shirt to touch her breast.

The woman told police she was so shocked, she got out of the police car and started walking toward her home.

Once home, she told investigators she later confided in her mother about it and sought to contact Internal Affairs, prompting the investigation.

The investigation started with Miami Police's Internal Affairs unit. Something then made them decide to ask the Miami-Dade Police Department to investigate.

The President of the Miami Fraternal Order of Police Javier Ortiz released a statement on the matter Wednesday.

"The Fraternal Order of Police is currently representing Officer Figueroa and he is looking forward to his day in court to be exonerated of these charges."

Ironically, this officer facing criminal charges was honored for valor after a 2013 incident in which he confronted a gunman who was firing off rounds in a busy supermarket parking lot and successfully disarmed the man.

In the neighborhood where the incident allegedly occurred, most were withholding judgment.

"I think, to be fair, both sides should come out with what they think went on and then let the courts decide what it is," said Gene Lomando with the Uptown Redevelopment Agency.

But resident Rayshawn Williams said this doesn't help build trust between police and the community.

"In this area we already have problems trusting officers, so that happens, it is not gonna help," Williams said.

There could be a major flaw in the prosecution's case. When the alleged victim was shown pictures in the line up, she picked a different person but investigators said that person strongly resembled the accused Figueroa and his photo was also not in the lineup.

During the investigation, police say security video captured the encounter between the officer and the girl at the scene. Furthermore, they say the video clearly shows Figueroa's unit number.

A conviction for false imprisonment could carry major prison time