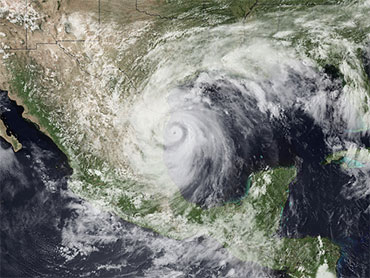 Alex, the Atlantic's first major storm of the summer, weakened from a hurricane to a tropical storm Thursday morning, but not before ripping off roofs, flooding streets and forcing thousands of people to flee coastal fishing villages in northern Mexico. It's also being blamed for three deaths, reports CBS News correspondent Don Teague.

The storm spared nearby Texas, which had prepared for a possible direct hit. While it spawned two tornadoes and caused 1,000 people to evacuated low-lying areas there, state officials reported no injuries or major damages.

The U.S. National Hurricane Center in Miami reported early Thursday that the storm had sustained winds of 70 mph. It says Alex is expected to weaken as it moves further inland.

Earlier, Alex whipped up high waves that frustrated oil-spill cleanup efforts on the other side of the Gulf of Mexico and delivered tar balls and globs of crude onto already soiled beaches.

The storm made landfall Wednesday night on a relatively unpopulated stretch of coast in Mexico's northern Tamaulipas state, about 110 miles south of Brownsville, Texas.

Earlier, the hurricane lashed Mexican fishing villages, whose residents fled inland to the town of San Fernando on buses and in pickup trucks. Hundreds of people filled a storm shelter in a town auditorium.

"We didn't bring anything but these clothes," said evacuee Carolina Sanchez, 21, motioning to two small plastic bags at her feet, as her 3-year-old sister Belen Sanchez Gonzalez clutched a purple and white stuffed toy poodle at the storm shelter.

Her father, a fisherman, was one of many coastal residents who stayed behind to keep watch on their homes and possessions.

Abel Ramirez of San Fernando's Civil Protection and Fire Department said seven fishing villages, with a combined population of about 5,000, were evacuated.

The storm blew down trees and lifted the tin roofs off several homes, but there were no immediate reports of injuries.

"The north winds are still blowing, which means the hurricane hasn't entirely passed by us yet," Ramirez said.

The civil defense office in Matamoros, across the border from Brownsville, said Alex's rains had already flooded around 30 neighborhoods there and officials were using small boats to rescue some residents.

Saul Hernandez Bautista, the Matamoros director of civil defense, said Alex had caused flooding and some damage, but with no injuries reported yet the city appeared to have escaped the worst.

"Thank God we managed to get the people out, there is water all over," he said. "Some trees have fallen, some (light) posts and lines are down, but nothing more."

In Texas, officials closed the causeway to South Padre Island, a vacation getaway off the Texas coast, and 9-foot waves were reported on the island's beach. The storm also spawned several tornados, including one which flipped a trailer near Brownsville, reports Teague.

More than 1,000 people in low-lying Hidalgo and Cameron counties fled to storm shelters. More than 1,000 homes were without power late Wednesday, with the biggest outage caused not by the storm but by a car that ran into a utility pole, American Electric Power spokesman Andy Heines said.

At least 100 families took shelter in a Brownsville high school.

Sergio Gonzales, 18, arrived with nine other family members after his father decided their house may not survive the flood.

Gonzales didn't agree with his dad.

"I think it's just going to be a normal one," he said.

The main threat as the hurricane begins to fall apart over land will be tornadoes, which could last another day or two, hurricane center meteorologist Chris Landsea said.

The other big threat is rain, Landsea said. Parts of Mexico and Texas are expected to get 6-12 inches of rain, which could cause flash flooding farther west, away from the coast, he said.

It was the first June hurricane in the Atlantic since 1995, according to the hurricane center.

Many in the border cities braved the growing rains: Commuters struggled to get to work, pedestrians crossed the bridge connecting Matamoros and Brownsville and newspaper hawkers manned the less-flooded intersections.

Flash floods also forced hundreds of evacuations in the southern Mexican states of Oaxaca and Guerrero, but hurricane specialist Eric Blake said those rains were only indirectly related to Alex and possibly the residual effects of Hurricane Darby, which has dissipated in the Pacific.

Three people, including a 5-year-old child, were killed when heavy rains and winds brought down a wall over their wooden house in Acapulco, state Civil Protection authorities said.

Texas residents had been preparing for the storm for days, readying their homes and businesses and stocking up on household essentials. But concerns eased as the storm headed to the south.

Engineers were watching the levees in south Texas as the storm approached the area.

Scientists in Texas were also monitoring a buoy system that records the Gulf's water directions and velocity every half-hour. That information will determine where the oil could spread, should it approach Texas as tar balls on the beach, said Texas land commissioner Jerry Patterson.

Oil rigs and platforms in the path of the storm's outer bands were evacuated, and President Barack Obama issued a pre-emptive federal disaster declaration for southern Texas counties late Tuesday.

The three oil rigs and 28 platforms evacuated are not part of the Gulf oil spill response.

The storm was far from the Gulf oil spill, but cleanup vessels were sidelined by the hurricane's ripple effects. Six-foot waves churned up by the hurricane splattered beaches in Louisiana, Alabama and Florida with oil and tar balls.

In Louisiana, the storm pushed an oil patch toward Grand Isle and uninhabited Elmer's Island, dumping tar balls as big as apples on the beach. Boom lining the beach had been tossed about, and it couldn't be put back in place until the weather cleared.

"The sad thing is that it's been about three weeks since we had any big oil come in here," marine science technician Michael Malone said. "With this weather, we lost all the progress we made."