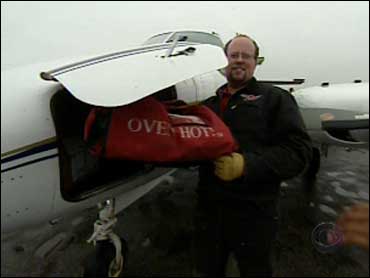 There are times in the Alaska bush when even the heartiest native can't take it any more, when dried salmon, caribou rump roast and seal jerky give a person the shivers.

That's when the phone starts ringing hundreds of miles away at Airport Pizza, in the old gold rush town of Nome on Alaska's West Coast, CBS News correspondent Jerry Bowen reports. It's the dream of former bush pilot Matt Tomter.

"I've flown muktuk, which is whale blubber, to gasoline, to just about anything you can imagine goes on airplanes here in Alaska," says Tomter.

"Hang on, I got pizzas for the flight," Tomter is often heard screaming as he runs out to a plane.

Sometimes, it's a large sausage pie for Shishmaref, or a Canadian bacon pie for Kotzebue, or a spicy chicken for St. Lawrence Island, nearly 200 miles away. The price: just $30 a pie, any time of year.

Flying in pizza may seem like a pie in the sky idea, but it's proving really popular. An average of 10 pizzas each day goes flying out to the villages. There's even on-time delivery — as long as the planes are on time.

But the plane ride is just the start. There's the lurching, bumpy ATV ride down the muddy village roads that makes ordering — and safely receiving — a pizza an adventure as big as America's largest state.

"Hey, thanks for the pizza," says loyal customer Dennis Davis.

Davis and his extended family are so relieved when ordering out — way out — works.

"We're just trying to bring that American dream to everyone here in the region. Own your own home. Go ahead, and get right to your education. And get pizza delivered to your house. That's pretty much how it should be," Tomter says.

Even in the remotest corners of Alaska, your very own piece of the American dream is available — any way you slice it.