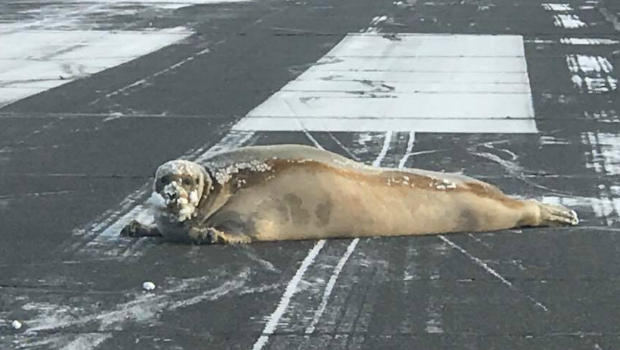 ANCHORAGE, Alaska -- In Alaska, it's not uncommon for wildlife like polar bears to wander onto an airport's runway, but a lounging seal is far more unusual.

But that's what workers found at the airport in the nation's northernmost city on Monday. A seal estimated to weigh 450 pounds was removed from the runway at the airport at Utqiagvik by way of sled.

A photo and video of the bearded seal lounging on the runway in the town formerly known as Barrow was shared by Scott Babcock on Facebook.

The state Department of Transportation got in on the fun by warning pilots of "low sealings" at the airport.

"Wildlife strikes to aircraft pose a significant safety hazard and cost the aviation industry hundreds of millions of dollars each year," Bailey said. "Birds make up over 90 percent of strikes in the US, while mammal strikes are rare. The safety of our aviation system and the traveling public is the primary goal during all wildlife control efforts."

The department's staff members are not allowed to handle marine mammals, so the seal was removed by North Slope Animal Control.