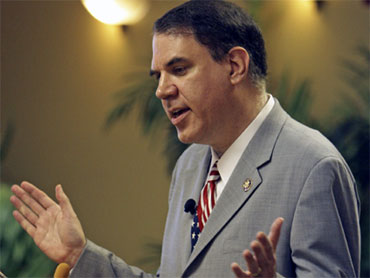 Famously outspoken Florida Democratic Rep. Alan Grayson over the weekend released an attack ad against his Republican opponent Daniel Webster, comparing Webster's votes on women's issues to the Taliban. The ad ends with a narrator calling him "Taliban Dan Webster."

"Religious fanatics try to take away our freedom, in Afghanistan, in Iran and right here in Central Florida," a female narrator says in the ad.

The ad features a short clip of Webster saying, "Wives, submit yourself to your own husband." It also repeatedly shows Webster saying, "She should submit to me." The clips were reportedly taken from a speech Webster gave at a conference of the nonprofit Christian group the Institute for Basic Life Principles.

The Orlando Sentinel fleshes out the specific accusations the ad makes against Webster. For instance, the charge that Webster "voted to deny abused women health care" reportedly refers to his vote against legislation that would have stopped insurance companies from calling domestic violence a pre-existing condition.

Webster this morning told local television station WOFL that he has not seen the ad -- and he managed to ridicule the ad's premise in his response.

"My wife asked me not to watch the ad, and I submitted to her," he said.

While he has not watched the ad, Webster said his remarks shown in the ad are surely taken out of context. "I certainly don't talk in three or four-word statements," he said.

Webster added that he's "taking the high road" by running positive ads while Grayson continues to attack him.

Grayson has run other controversial ads in this race, including an ad that called Webster a "draft dodger." The nonpartisan FactCheck.org said of that ad, "It is one of the nastiest we have seen so far this year, and it's false."

The first-term congressman has gained notoriety in his first two years in Congress for his brash statements. During the health care debate last year, Grayson said on the House floor that Republicans' health care plan amounts to hoping sick people "die quickly."

While Grayson's style of politics has earned him some fans among the liberal base, he faces a competitive re-election race in Florida's 8th district. CBS News has labeled the race a toss up, while the nonpartisan Cook Political Report also calls the race a toss up and notes that the district leans Republican.