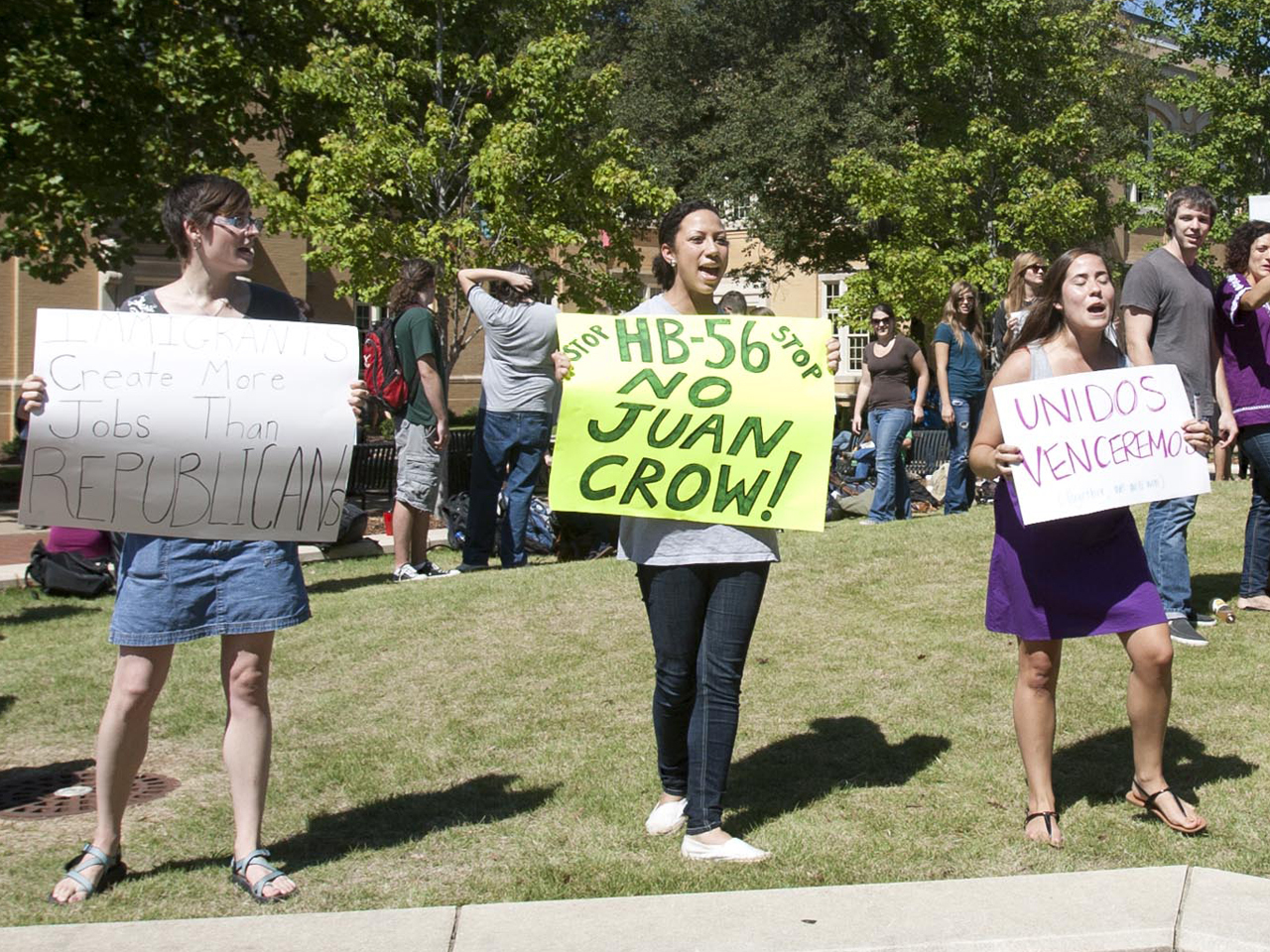 BIRMINGHAM, Alabama - Police in Alabama are getting ready to enforce what is considered by many as the toughest immigration law in the United States.

Beginning Thursday, authorities can question people suspected of being in the country illegally and hold them without bond, and officials can check the immigration status of students in public schools, Gov. Robert Bentley said.

Those two key aspects of Alabama's new law were upheld by a federal judge on Wednesday.

The governor said parts of the law take effect immediately.

"We intend to enforce it," Bentley said.

U.S. District Judge Sharon Blackburn, a Republican appointee, wrote in a 115-page opinion that some parts of the Republican-backed law conflict with federal statutes, but others don't. Left standing were several key elements that help make the Alabama law stricter than similar laws passed in Arizona, Utah, Indiana and Georgia. Other federal judges have blocked all or parts of those.

There are three separate lawsuits against the Alabama law, including a challenge from President Barack Obama's administration. Blackburn's ruling is expected to be appealed.

John Carroll, a former U.S. magistrate judge who is now dean of Samford University's law school in suburban Birmingham, said Blackburn's ruling was mostly consistent with decisions from other states with the exception of her allowing Alabama's "stop and ask" provision, which lets police request people's immigration papers.

"I think down the line there are other arguments that can be made as the case goes forward," said Carroll.

Agricultural leaders fear the law could cost farmers money this autumn by scaring away Hispanic workers who are vital to harvesting crops statewide.

"There are some sweet potato farmers in this state it's really going to hurt. I don't know how they're going to get their crops out," said Jeremy Calvert, a farmer in rural Bremen.

Zan Green, a tea party activist in metro Birmingham, said she was happy with the decision, saying citizens of foreign countries have benefited for years through welfare, entitlements, education, medical care and child tax credits.

"Judge Blackburn's ruling is the beginning of removing the enormous financial burden of illegal immigration from the backs of Alabama citizens," she said in a statement.

The judge refused to block a section of the law that requires public schools to verify students' citizenship and report overall statistics to the state, but the immediate effect isn't clear since schools have already started. Alabama was the first state to include such a provision, so Blackburn's decision could set a blueprint should others adopt similar laws.

Immigration became a hot issue in Alabama over the past decade as the state's Hispanic population grew by 145 percent to about 185,600. While the group still represents only about 4 percent of the population, some counties in north Alabama have large Spanish-speaking communities and schools where most of the students are Hispanic.

Alabama Republicans have long sought to clamp down on illegal immigration and passed the law earlier this year after gaining control of the Legislature for the first time since Reconstruction. Bentley signed it, saying it was vital to protect jobs of legal residents.

Republican Sen. Scott Beason, one of the sponsors of the bill, was happy with Blackburn's decision and hopes, like the governor, that the entire law takes effect after appeals.

"There are still legal questions and there's still work to be done," he said.

Blackburn's orders temporarily blocked several parts of the law until she can issue a final ruling. Those measures would:

- Make it a crime for an illegal immigrant to solicit work.

- Make it a crime to transport or harbor an illegal immigrant.

- Forbid businesses from taking tax deductions for wages paid to workers who are in the country illegally.

- Bar drivers from stopping along a road to hire temporary workers.

- Make federal verification the only way in court to determine if someone is here legally.