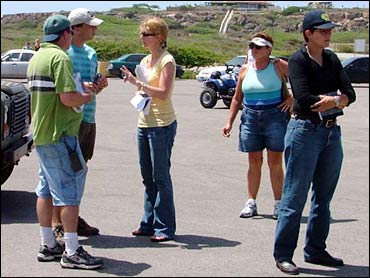 Police in helicopters and all-terrain vehicles are searching outlying areas of the Caribbean island of Aruba for a missing Alabama teenager, as are hundreds of local residents and tourists who have volunteered to help out.

Natalee Holloway's family asked Aruba radio and television stations to broadcast a reward offer, though they did not specify an amount, said her mother, Beth Holloway Twitty. The family is promising a reward for anyone who brings the missing teenager safely to a police station or hospital.

Holloway's father, Dave Holloway, who lives in Meridian, Miss., arrived in Aruba on Wednesday to help with the search, according to the Jonesboro Sun.

Holloway, 18, was among 125 seniors from Mountain Brook High School, near Birmingham, Ala., on a five-day trip to the Dutch Caribbean island.

FBI officials, Aruba police and Dutch authorities have been searching for her since Monday, when she did not show up for her group's return flight. Several family members traveled to Aruba to help in the search.

"Everybody has been quite supportive," Holloway Twitty told The Associated Press. "I am not leaving. I am going to have Natalee with me."

Holloway was last seen by friends getting into a vehicle and leaving the Carlos and Charlie's nightclub in the capital of Oranjestad before dawn Monday.

Police questioned and released three Aruban men who said they dropped Holloway off early Monday at the Holliday Inn, where she had been staying about 3 miles from the capital of Oranjestad, said police assistant inspector Jules Sambo. The three were not suspects, he said.

"We don't have any indication as to if she is alive," Sambo said. "The whole population is aware that she is missing. The police are doing everything to find her."

Police, using helicopters and all-terrain vehicles and patrol cars, are combing the Arashi area in the northwestern tip of Aruba, a rugged terrain of sand dunes, craters and beaches. The area is near the Holiday Inn.

More than 100 people, mostly American tourists, offered to help during a gathering Thursday morning at the Holiday Inn, organized by International Friends of Aruba, a group of wives of Americans working on the island. The volunteers were distributing fliers with the teenager's photo in various parts of the island.

"Visitors and people that live here have donated their time... searching, passing out posters, it's just a tremendous outpouring of support," Paul Reynolds, an uncle of the missing teen, told WBRC-TV.

"She has a very loving family and is a very happy girl," said Haleigh Uncapher, a classmate who delivered a flier to local Magic radio station.

Aruba, with a population of about 72,000, is off the north coast of Venezuela and is part of the Netherlands Antilles.

Back home in Alabama, worried relatives and friends have been gathering at Mountain Brook Community Church near Birmingham, praying that Natalee is safe and will be found soon.

"We want everybody, as many people as we can to pray for Natalie," Frances Ellen Bird, a friend who on the Aruba trip, told WBRC-TV. "I talked to her mom today - she said she could feel that everybody was praying for her."

Relatives say the military has joined the search in Aruba and that on the U.S. side, the FBI has gotten involved.