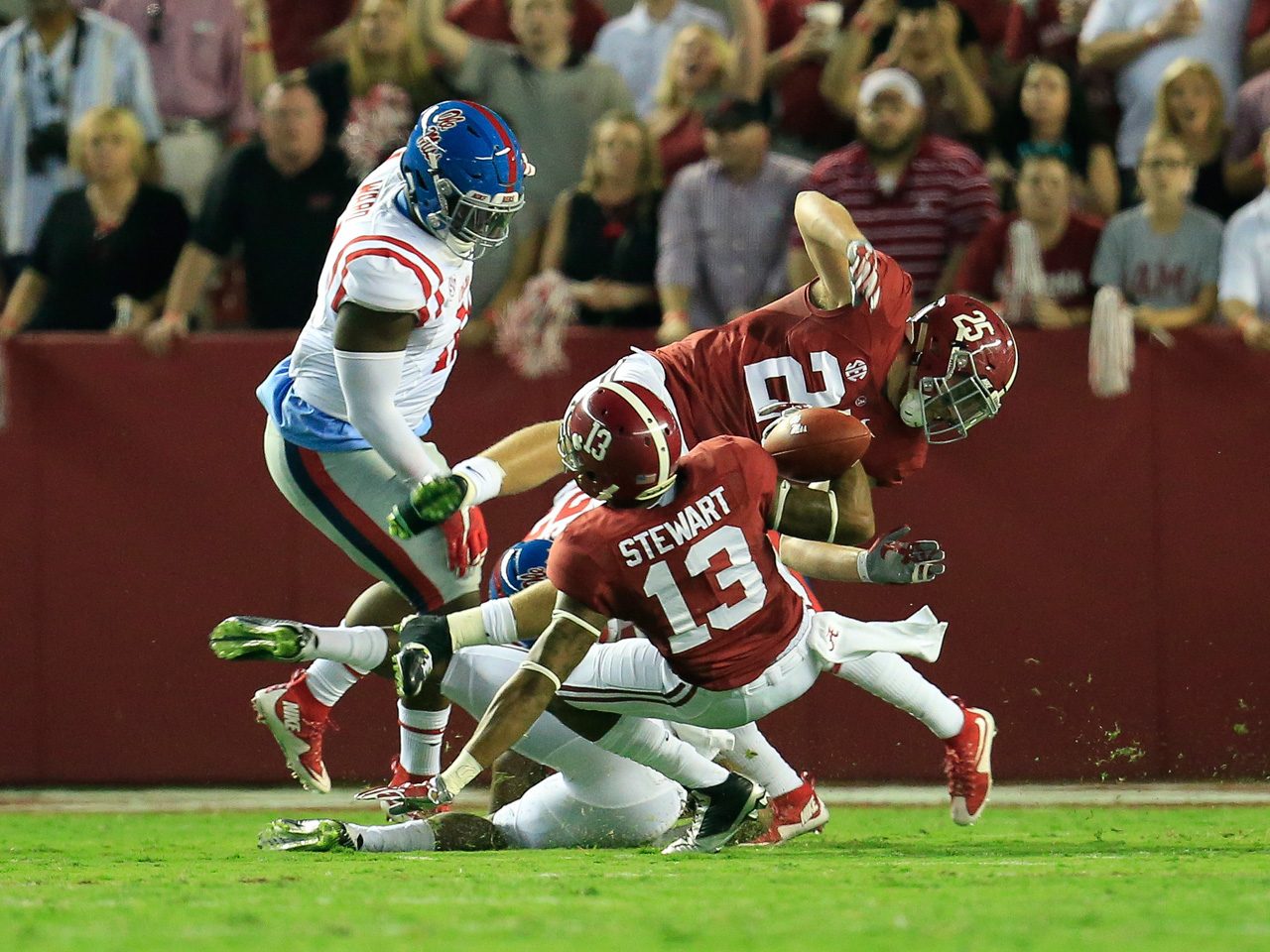 TUSCALOOSA, Ala. - Chad Kelly completed a deflected 66-yard touchdown pass and added two more long ones in the fourth quarter to help No. 15 Mississippi beat No. 2 Alabama 43-37 on Saturday night.

The Rebels (3-0, 1-0 Southeastern Conference) left the topsy-turvy game with their first victory in Bryant-Denny Stadium since 1988, and second straight in a one-sided series. The Crimson Tide (2-1, 0-1) had been 25-1 in Tuscaloosa against Ole Miss and had never lost two straight.

The Rebels made two final defensive stands, the first when Tony Bridges intercepted a deep ball from Jake Coker, who came off the bench to lead a comeback from a 30-10 deficit.

Kelly delivered big play after big play after an ineffective first half, none wilder than a fling and a prayer in the third quarter, a 66-yard deflection caught by Quincy Adeboyejo for a touchdown.

Christian McCaffrey rushed for 115 yards for the Cardinal (2-1, 1-0), who scored just six points in their stunning season-opening loss at Northwestern. They looked more like their usual powerhouse selves Saturday during a 474-yard offensive performance at the Coliseum, where they've won four times in their last five trips.

Cardale Jones started for the Buckeyes (3-0) and J.T. Barrett finished, but for the second straight week neither was particularly effective against an opponent Ohio State was expected to blow out.

Jones threw two interceptions and went to the bench in the second quarter. Barrett threw a touchdown pass and an interception. Ohio State had five turnovers in all, but still managed to extend the nation's longest winning streak to 16 games.

Last week, the Buckeyes shook free of Hawaii in the second half, but they couldn't do the same with Northern Illinois (2-1).

The Huskies cut the lead to 20-13 on a field goal with 7:46 left in the fourth quarter, and got the ball back when Marlon Moore forced a fumble by Curtis Samuel and Northern Illinois recovered at its own 25 with 4:05 left in the game. The Buckeyes clamped down again with Joey Bosa and Sam Hubbard crunching Drew Hare for a sack on third-and-long. In need of one first down to wrap it up, Ohio State came up short.

Northern Illinois' last drive started at its 20 with 1:34 left, but Hare threw four incomplete passes under duress and Ohio State could finally take a knee.

FORT WORTH, Texas - Trevone Boykin threw for 454 yards and five touchdowns for TCU and added a highlight scoring run when he ducked out of a sack.

The Horned Frogs (3-0) won their 11th consecutive game, a winning streak second only to the 16 in a row by top-ranked defending national champion Ohio State.

TCU was up 42-17 when Boykin threw a 31-yard TD pass to Kolby Listenbee on the first series after halftime. But SMU, with its own dual-threat quarterback in Matt Davis, scored the next 20 points before Boykin's 42-yard scoring strike to Josh Doctson with 6:32 left.

Boykin, who finished fourth in the Heisman Trophy voting last year, completed 21 of 30 passes. His only interception did help the late surge by SMU (1-2), but the senior quarterback made another big throw to Doctson to make sure the Frogs avoided being upset in the Battle for the Iron Skillet.

Doctson had five catches for 171 yards and two touchdowns. Aaron Green ran 21 times for 164 yards with two scores, including a 1-yarder in the final minute.

EAST LANSING, Mich. - Connor Cook threw three touchdown passes in the first half for Michigan State, including one that Aaron Burbridge hauled in with a spectacular catch in the end zone.

Cook threw for 247 yards and four touchdowns, and Burbridge caught eight passes for 156 yards and three TDs. The highlight was Burbridge's 28-yard scoring reception in the second quarter, when he leaped to make the catch and, as his body stretched parallel to the ground, touched his left foot down in bounds.

The Spartans (3-0) were coming off a big win over Oregon, and Air Force's option isn't easy to prepare for, but the Falcons (2-1) never mounted much of an upset threat.

ATHENS, Ga. - Greyson Lambert answered his skeptics with a near-perfect performance, throwing for 330 yards, three touchdowns and setting an NCAA record by completing all but one of his 25 passes to lead the Bulldogs past South Carolina.

Lambert posted the highest percentage (96.0) in FBS history for a minimum of 20 completions, breaking the mark of 95.8 (23 of 24) shared by Tennessee's Tee Martin and West Virginia's Geno Smith. Lambert also completed his final 20 passes, breaking the previous school record of 19 straight completions by Mike Bobo in the 1998 Outback Bowl.

Nick Chubb eclipsed 100 yards rushing for the 11th game in a row, carrying 21 times for 159 yards and two scores. Sony Michel ran for a TD and had two more receiving.

Georgia (3-0, 2-0 Southeastern Conference) seized control with a touchdown in the final seconds of the first half and two more in the first 2 1-2 minutes of the third quarter, taking advantage of an interception by South Carolina's new starting quarterback, former walk-on Perry Orth.

South Carolina (1-2, 0-2) has lost its first two conference games for the first time since 2008. It was the most points a Steve-Spurrier coached team has ever given up to Georgia.

Patrick Skov scored on a 24-yard run and a 15-yard catch in the final minute after the Yellow Jackets recovered an onside kick, but Notre Dame's Torii Hunter Jr. recovered a second onside kick with 21 seconds left to clinch the victory.

Georgia Tech (2-1) entered the game averaging 67 points and 457 yards rushing, but struggled to get much going until the final minute. The Fighting Irish held the Yellow Jackets to 216 yards rushing.

Notre Dame is 3-0 for the third time in the past four seasons.

PASADENA, Calif. - Nate Starks scored on a 3-yard run with 3:25 remaining, Paul Perkins rushed for 219 yards and a touchdown, and UCLA rallied to beat BYU.

Starks ripped off runs of 31 and 22 yards on consecutive carries before scoring two plays later, finishing with 81 yards for UCLA (3-0).

Tanner Mangum drove the Cougars to the Bruins 42-yard line, but his fourth-down pass was intercepted by Myles Jack, allowing the Rose Bowl crowd of 67,612 to finally celebrate.

Adam Hine rushed for 149 yards and a touchdown for BYU (2-1), which dropped to 1-6 against top-10 teams under coach Bronco Mendenhall.

EUGENE, Ore. - Jeff Lockie threw for 228 yards and two touchdowns in his first start for Oregon.

Lockie replaced Vernon Adams, who was rested with a broken index finger on his throwing hand.

Royce Freeman ran for 101 yards and a touchdown to help the Ducks (2-1) rebound from a loss at Michigan State. Aidan Schneider added four field goals, all in the first half as Oregon built a 33-7 lead.

Nick Arbuckle threw for 318 yards and three touchdowns, and freshman Penny Hart had nine catches for 128 yards for the Panthers (1-2).

Fournette gained 71 yards on LSU's first play from scrimmage and had 169 yards by halftime, then was rested for much of the second half - perhaps the only thing preventing him from breaking Alley Broussard's single-game LSU rushing record of 250 yards, set against Mississippi in 2004.

Auburn (2-1, 0-1), which needed overtime to avoid an upset by Jacksonville State a week earlier, trailed 24-0 at halftime and never threatened thereafter.

NORMAN, Okla. - Baker Mayfield threw for 487 yards and four touchdowns and ran for another 85 yards and two scores to power Oklahoma.

Tulsa (2-1) stuck with the Sooners for much of the game with Dane Evans throwing for 427 yards and four touchdowns and Keyarris Garrett catching 14 passes for 189 yards.

Oklahoma led 31-24 at halftime. The teams combined for 863 yards in the first half, the most in a first half since Fresno State and San Jose State combined for 1,002 in a 2013 game.

Tulsa and Oklahoma combined for 1,376 yards.

The Aggies (3-0) were up by four early in the second quarter before scoring 17 straight points, with two touchdown catches by Josh Reynolds, to make it 31-10 early in the third. The second one came soon after an interception by Donovan Wilson on the first play of the second half.

Tyler Stewart threw for 206 yards and two touchdowns for Nevada (1-2).

TUCSON, Ariz. - Anu Solomon completed 25 of 35 passes for 285 yards and four touchdowns in a little more than a half of play, and Arizona set school records for points and total yards in a rout of Northern Arizona.

Arizona (3-0) broke the mark for points set in a 74-0 win 94 years ago over the school now known as UTEP. The Wildcats' 792 yards eclipsed the mark of 787 set against UNLV last season.

Arizona scored 63 straight points after the Lumberjacks (2-1) cut the Wildcats' lead to 14-13 in the second quarter.

FRESNO, Calif. - Devontae Booker ran for 156 yards and two touchdowns, and Utah had two scores on special teams and one on defense.

Utah defensive tackle Stevie Tu'ikolovatu recovered a fumble by Fresno State quarterback Chason Virgil on a sack and returned it 37 yards for a touchdown to put the Utes (3-0) up 10-3 late in the first quarter.

Booker's 30-yard touchdown run made it 17-3 lead late in the second quarter and he added a 7-yard scoring run for a 21-point lead midway through the third.

After Fresno State (1-2) pulled to 24-10 on Zack Greenlee's 5-yard pass to Blandin early in the fourth, Cory Butler-Bird returned the ensuing kickoff 98 yards for a touchdown. After the Bulldogs' next possession, Utah's Britain Covey scored on a 77-yard punt return to make it 38-10 with about 9 minutes remaining.

With just a under a minute left, Sherrils picked off a pass by Huskies backup quarterback Tim Boyle on a fourth-down, fake field goal attempt. Sherrils also forced and recovered a fumble with 4:26 left in the first half for Missouri (3-0). UConn is 2-1.

Solomon Vault returned the opening kickoff of the second half 98 yards for the touchdown that put the Wildcats (3-0) ahead to stay. Northwestern forced three turnovers and opened a season with three victories for the first time since 2013 - also the last time the Wildcats were ranked.

MADISON, Wis. - Two-way player Tanner McEvoy had one of Wisconsin's three touchdown runs in a game where two Badgers defenders were ejected for targeting and play was delayed briefly in the fourth quarter because of an errant fire alarm.

Starting inside linebacker Leon Jacobs was thrown out in the first quarter, and cornerback Derrick Tindal was ejected in the third. The fire alarm led to a delay with 8:56 left and Troy (1-2) driving.

STILLWATER, Okla. - Devante Averette scored on a 6-yard fumble return only 45 seconds in, and Oklahoma State forced seven turnovers - all of them leading to points.

Blake Bogenschutz was 8 of 13 for 58 yards and a touchdown for UTSA (0-3), but also fumbled twice and threw two interceptions before he was taken out of the game late in the second quarter.