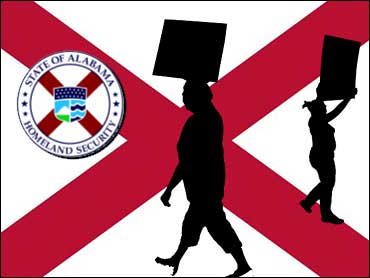 A Web site operated by the Alabama Department of Homeland Security identified gay rights organizations, anti-abortion groups, environmentalists and people opposed to genetically-altered foods among those who could be classified as terrorists.

Certain Web pages were removed from the Internet after the agency received complaints about the site.

It had listed different types of terrorists, such as hate groups, anti-government groups and anarchists, and included "single-issue extremists" which it said can be found in groups that rally behind specific causes.

The page had said, "Single issue extremists often focus on issues that are important to all of us. However, they have no problem crossing the line between legal protest and change and illegal acts, to include even murder, to succeed in their goals. In many communities, law enforcement officials feel that these groups offer the greatest organized threat to the community."

The site indicated that these "radical elements" are found in many of the following movements:

The site softened its critique, somewhat, by stating, "Single-issue extremists are not trying to fight a cheap war or overthrow our government. In fact, they feel that what they are doing is necessary for a better world."

The department's director, Jim Walker, says his agency received a number of calls and e-mails from people who said they felt the Web site unfairly targeted certain people just because of their beliefs.

Walker says he plans to put the Web site back on the Internet, but will no longer identify specific types of groups.

Howard Bayliss, board chair for the gay and lesbian advocacy group Equality Alabama, says he doesn't understand why advocates of gay rights would be included on the list.

He says Equality Alabama has only had peaceful demonstrations. He says he's "deeply concerned we've been profiled in this discriminatory matter."

Allison Neal, attorney for the American Civil Liberties Union of Alabama, says she has looked at parts of the Web site and is concerned about anything that pinpoints people "exercising their constitutional right to protest" as potential terrorists.

Walker says the Web site, which could be reached by links from the department's main Web page, had been up since spring 2004 and was inspired by a similar Web site in Pennsylvania where, he says, "citizens could go and learn about terrorists."

Walker says over three years the single-issue Web site got a relatively small number of hits and stirred little interest, until recently when it apparently became the subject of Internet blogs.

He says the site got 20,000 hits in one day and the department started getting calls from people who were offended by it.

Walker says he does not have a problem with the site.

"Just because people are listed," he says, "that doesn't make them extremists."

He continues: "But sometimes people will go to extremes." He cited examples of people who have bombed abortion clinics.

But Walker says because the Web site did not list every possible example of single-issue terrorism, he has decided to eliminate the examples.