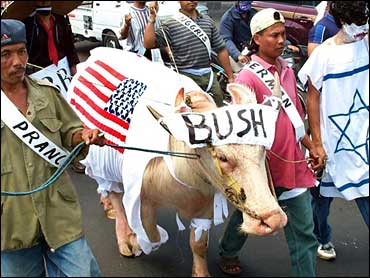 It was a deadly calling card - bomb blasts across Manila that killed more than 20.

The attacks were carried out by a gentle-looking man named Roman al-Ghozi, reports CBS News Correspondent Barry Petersen. In court, he confessed to possessing a ton of explosives, all done in the name of a shadowy Asian terrorist group directly linked to al Qaeda.

"They [al Qaeda] have supported the group that has become very active in the region called Jemaah Islamiah," said Robert Gelbard, the former U.S. ambassador to Indonesia.

Jemaah Islamiah has sent some recruits to al Qaeda training camps in Afghanistan. They got both money and inspiration from Osama bin Laden. They hatched plots, among them to bomb U.S. embassies in Indonesia, Malaysia and Singapore.

Also in Singapore, they filmed plans to murder American sailors at a bus stop and blow up U.S. warships.

That scheme was discovered. In Singapore and Malaysia, dozens were arrested. But in Indonesia, no action at all.

With it's population numbering 90 percent Muslim - and a fragile coalition democracy coming together after decades of dictatorship - there is no stomach here to challenge any Muslim group. And that is dangerous not just for Indonesia, but for America's war on terrorism, because Jemaah Islamiah has a big vision and followers are willing to fight and die for it.

Their dream is a Pan Islamic state - stretching from Muslim parts of southern Thailand and Cambodia down throughout all of present-day Malaysia, Singapore and Indonesia into Brunei and on to the southern Philippines. It would be all-Islamic, all fundamentalist and all anti-American.

Ralph Boyce is the current U.S. ambassador to Indonesia. He's also served in other southeast Asian countries and has heard about the Pan Islamic State.

"I think it very unlikely (but) certainly a concern," he said. Asked what would make it happen, he said "I think that a lack of communication, a sense of alienation as you say, if the economic situation goes south and stays that way."

The greatest danger in Indonesia are the slums, and there are a lot of them. It is here where anti-western fundamentalism takes root and flourishes, where desperation mutates into anger.

Anger that was found in a small city in central Java where thousands rallied to hear Abubakar Ba'asyir, the spiritual leader of Jemaah Islamiah, praying for the health of the al Qaeda leadership.

On Friday's CBS Evening News, in his first ever American television interview, Abubakar Ba'asyir speaks openly of his dream of an Islamic State and his rage against America.
View CBS News In
CBS News App Open
Chrome Safari Continue
Be the first to know
Get browser notifications for breaking news, live events, and exclusive reporting.