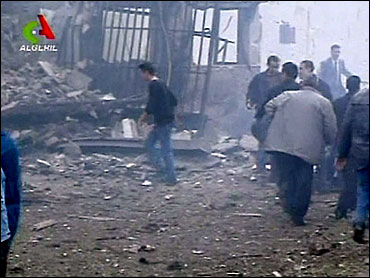 The pan-Arab Al-Jazeera Television on Tuesday aired a video it said was from al Qaeda's branch for North Africa, showing the preparation and an explosion purported to be Algeria's suicide bombings that killed 33 in April.

The brief video showed equipment and wires being put together, followed by a large explosion. The equipment appeared to be land mines and explosives.

At the end of the initially aired segment, a bearded man said to be Abu Musab Abdulwadood, the leader of Algeria's main Islamic insurgency movement, called on young Muslims to join his group and carry out suicide bombings.

Abdulwadood said the young should join the "long list of martyrs."

"We carry the good news to our nation and our young people and tell them that the list of martyrs is long and is getting longer day after day," Abdulwadood said. "Volunteers are competing to open this glorious combating door. Don't miss out on (joining the) entourage."

"This is a crusader war on Islam, this is a decisive battle between the infidels and the believers," he added. "Whoever misses this war will be missing a chance in a lifetime."

A group called Al Qaeda in Islamic North Africa claimed responsibility for the April 11 attacks in Algiers which killed 33 people and wounded 57 in coordinated suicide bombings targeting the prime minister's office and a police station.

The attacks were the deadliest in the Algiers region since 2002. They came as the North African nation struggles to come to terms with an insurgency that has killed up to 200,000 people since 1992 but has largely died down in recent years. The insurgency erupted after the army canceled elections that a Muslim fundamentalist party was set to win.

Al Qaeda in Islamic North Africa is the new name for the GSPC, a group built on the foundations of the insurgency movement.

According to media reports in Algiers, Algerian security services arrested an unspecified number of suspects accused of "logistical preparations" for the attacks, and some of them have already reportedly been brought before prosecutors. However, there have been no official statements on this.

The Algerian reports said the explosives were a mixture of fertilizers and other chemical supplies, with two detonators — one controlled by the suicide bombers, the other by remote controls.